Why Pickleball is the Perfect Activity for the 55+ Community 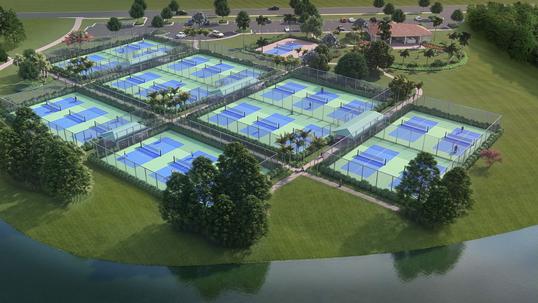 What comes to mind when you hear the words “active adult”? Perhaps playing a round of golf or shuffleboard with your friends. Today, the image popping into people’s heads is a showdown on the pickleball court. The tennis, ping pong and badminton-inspired game has caught fire in America, but it’s the dedication from individuals 55+ that has made the sport a staple at active adult communities.

Pickleball originated in 1965 in the backyard of Washington State Congressman Joel Pritchard. Over the next 45 years the sport spread slowly throughout the U.S. Then came the boom. According to the 2016 Sports & Fitness Industry Association Report, a mere 100,000 individuals were playing pickleball in 2010. Less than ten years later, that number spiked to 2.8 million, and locations to play doubled to over 4,000. The people to thank, 55+ individuals.

Today, pickleball’s core player, those playing more than eight times a year, is largely over the age of 55. 74.5% to be exact.

Pickleball is a low-impact sport, meaning it leaves minimal wear and tear on joints. While golf, tennis and other popular sports for this demographic are great for cardiovascular health, they can be harmful to people with joint problems and pre-existing injuries. The lightness of the ball coupled with the smaller size of the court means players are still getting a workout, but they aren’t putting themselves at as high a risk of injury.

As more active adults flock to the court, pickleball is becoming a key amenity for those looking to settle down in a new community, and many properties are responding to this demand by creating dedicated facilities for their residents. One of the newest large-scale centers is the 27-court pickleball facility at PGA Village Verano in Port St. Lucie, Florida.

Kolter Homes’ portfolio of active adult communities is no stranger to the world of pickleball. Cresswind at Lake Lanier in Georgia originally had just a few tennis and badminton courts. The arrival of new residents from Florida in 2013 helped to spur the development of the Cresswind Pickleball Club, which now has over 200 members, organized tournaments and 15 dedicated courts for play.

Between the continuous growth of the industry, the success at other communities and yearly surveys of residents, Kolter Homes knew that a full service pickleball facility was a must-have for their newest property. The facility will be the largest private pickleball center in South Florida with 27 courts, one of which is a championship-style court for tournament play, multiple viewing areas and covered seating.

As these large-scale facilities continue to pop up all over the U.S. it’s a positive indicator that America’s fastest growing sport is quickly becoming the norm for active adult communities. It’s safe to say this addicting sport is here to stay!