Dover, DE (June 4, 2019) - Noble’s Pond, Delaware’s premier 55+ active lifestyle community, is home to adults from all regions of the country and all walks of life.  It is also home to a large number of Armed Forces veterans – men and women who have proudly served in the Air Force, Navy, Army, Coast Guard and Marines.  To serve as a reminder of the more than 80,000 service members who are still listed as missing in action or prisoners of war, Noble’s Pond hosted a ceremony to unveil a permanent POW-MIA Chair of Honor on June 1.

The POW-MIA Chair of Honor is a national program of The Rolling Thunder®, a non-profit organization focused on Prisoner of War and Missing in Action issues, as well as veterans affairs.  The group is known for its motorcycle rides to focus attention on veterans, with the motto “We Will Not Forget”, therefore, the POW-MIA Chairs remain perpetually empty.  Over 30 members of Rolling Thunder® participated in the ceremony and rode through Noble’s Pond prior to the official installation.

“There are a number of veterans living at Noble’s Pond, and we thought installing a POW-MIA Chair of Honor on the property would be the perfect way to both honor our living veterans and pay tribute to those servicemen and women who are missing in action or incarcerated as prisoners of war,” said Walt Waite, who served in the U.S. Navy and is now president of the Noble’s Pond Veterans Association.  “Our clubhouse features a flag display from every branch of service, so it is especially fitting that the chair has been installed in front of the clubhouse near the American flag.  The clubhouse also houses a plaque made by one of our residents that lists the names of more than 100 deceased veterans who are members of Noble’s Pond families.”

Award-winning Noble’s Pond is Delaware’s premier 55+ active lifestyle community.  Built and developed by Harry Miller III, a third-generation home builder and president of Regal Builders, Noble’s Pond features beautiful new single-family homes with a variety of well-designed, customizable floor plans.  The development is situated on 300 acres of bucolic farmland just outside Dover, the state’s charming capital, with fine restaurants, culture and history.  The acclaimed master-planned community offers top amenities including a beautifully appointed clubhouse, a large outdoor pool, bocce courts, a putting green, tennis and pickle ball courts, a five-acre pond with a pier and observation deck, natural walking trails and a community garden.  A hallmark of life at Noble’s Pond is charitable involvement and support.  Throughout the year, the community hosts fundraising events and provides opportunities for individual residents to volunteer their time in support of a number of non-profit organizations. 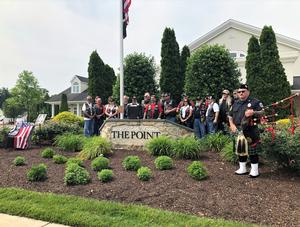