Originally built in the early 1700’s, this landmark will begin its latest chapter as a multigenerational amenity that celebrates the mountain’s colorful history. The Outpost offers a setting for talks, fireside stories and refreshments on clear evenings under the historic chimney ruin. Modern updates include the addition of lounge areas, an indoor bar, 75” high-definition television and a large outdoor covered deck offering scenic mountain vistas.

“We are seeing more homebuyers look for communities that offer an authentic living experience,” shared Joe Dellinger, Chief Operating Officer at Balsam Mountain Preserve. “The thoughtful preservation and enhancement of the Outpost is another example of how Balsam residents can enjoy an immersive mountain-living experience that goes beyond the traditional gated community.”

The history of the Outpost can be traced back to Fort Thicketty, a storied, Revolutionary War-era fort located near Cowpens, South Carolina. The Outpost’s logs were sourced from the fort, which was originally built to protect settlers. However, in May 1780 the fort played a pivotal role in the Revolutionary War and became occupied by British Loyalists under the command of Captain Patrick Moore.  Two months after the occupation, 600 American patriots led by Colonel Isaac Shelby, advanced on the fort while brandishing arms and making fearsome war cries—said to be the original “rebel yells.” The efforts of Shelby and his militia of mountain men caused the loyalists to surrender without a shot ever being fired.

The highly anticipated Doubletop Village will feature 23 turn-key cottages surrounding a village center with amenities ranging from a Members’ Grille, Club Tavern, General Store, an Organic Garden and Activity Lawns where families can gather to visit, play lawn games and enjoy scenic views. Designed by Atlanta-based architecture firm Harrison Design, each cottage will embrace the theme of bringing the outdoors inside with ample windows, open floor plans and the integration of natural materials.

Balsam Mountain Preserve is a low-density, conservation-orientated private residential community set on 4,400 acres in the North Carolina Blue Ridge Mountains near Asheville. Surrounded by the Nantahala National Forest, the Pisgah National Forest and the Great Smoky Mountains National Park, Balsam Mountain Preserve was created as a “community within a park.” With an ethos centered on land-stewardship, seventy-five percent (3,400 acres) of the property has been placed in a permanent conservation easement, ensuring the preservation of its present park-like state in perpetuity. Refined amenities of the community include an Arnold Palmer Signature golf course, equestrian center, fitness and wellness pavilion, pool, nature center, tennis courts, guided hiking, fishing and camping opportunities, gathering house and food & beverage offerings. 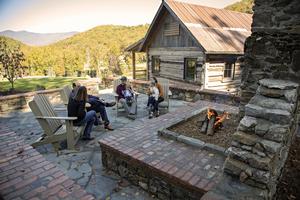