Divided into three distinct nine-hole sections, each takes full advantage of the terrain and presents its own challenges and delights. The Lakes Course and the Foothills Course, which opened in 1990, have a more traditional Carolina ‘Sandhills’ feel. The Lakes lies at the lower end of the community while the Foothills features some elevation changes. The Mountain Course, opened in 1994, takes players further up to the heights of Edwards Mountain offering breathtaking long-range views. At the convergence of the three sections sits a 42,000 s.f. Clubhouse. Finished in 1995, it completes the setting and serves as Governors Club’s social hub.

In addition to the 27-hole course, there are also a number of other golf-related facilities and amenities at Governors Club. Golfers can take advantage of several practice areas including a double-sided full-length practice tee, three putting greens and pitching and short game practice greens. Those who wish to improve and refine their game even further can benefit from TPI Golf Fitness Classes and technology like V1 Teaching Technology and Ernest Sports Launch Monitors. In addition there is an on-site golf shop and resident PGA Professionals.

Renovations, Awards and Designations
$600,000 of renovations were completed in 2013 further improving an already amazing course and Clubhouse. Bunkers were rebuilt and all greens were converted to Champion Ultradwarf Bermudagrass. Within the Clubhouse, locker rooms, the foyer, the ballroom and much of the second floor all received major renovations.

In 2015 Governors Club was designated by BoardRoom magazine as a ‘Distinguished Emerald Club of the World’ listing it among the top 5 percent of golf clubs worldwide. The Governors Club course has also previously been ranked as one of the top 15 courses in North Carolina by Golf Digest.

True to its name, the championship course is a designated U.S. Open Regional Qualifying Site and has hosted the U.S. Women's Open Sectional Qualifier and U.S. Open Qualifiers. Five iterations of the the Carolinas Golf Association (CGA) North Carolina Men's Amateur Championship have also been held at the course.

Style and Variety
Situated only minutes from Chapel Hill, North Carolina, this gated residential golfing community has residences suitable for a variety of preferences, budgets and lifestyles. Homes in the exclusive gated golf course community typically list from the $400K to $2M plus. A small number of lots are also available for those wishing to build a custom home. 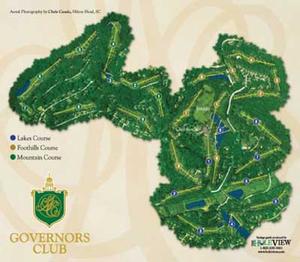