LELAND, NC (June 10, 2016) - On Memorial Day, Compass Pointe held an annual community celebration at their Grand Lanai to raise money for the Disabled American Veterans (DAV) of Wilmington. This was the third year The Compass Pointe Veterans Club hosted this event. A new addition to the event was a memorabilia and baked goods auction organized by Marine Aviation Logistics Squadron 29 (MALS-29). The auction raised approximately $2,000 for the Marine Corps Birthday Ball in Myrtle Beach, SC this coming November. This annual commencement and fundraiser served as the predecessor to the Disabled Veterans Golf Tournament which had been held the week before.

Compass Pointe resident and founding member of the Veterans Club, Ed Hulser, described the tournament as “fun for a great cause”, but was sure to touch on a somber incident. Right before the 9:00 A.M. shot gun, player and Compass Pointe resident, Rob Terzakian, suffered a major heart attack. Luckily, Raymond Andresen, a MALS-29 Squadron Gunnery Sergeant, was on the scene where he resuscitated Terzakian three times.  The victim was then rushed to New Hanover Medical and a recent update says he is doing fine. The MALS-29 plans to award Andresen with the Navy and Marine Corps Achievement Medal for saving Terzakian’s life.

At the Compass Pointe Memorial Day Celebration, food and entertainment was provided for enjoyment as well as a series of activities to honor past and present service members. Activities included a golf cart parade, flag ceremony, and The Star Spangled Banner was performed by the daughter of a community resident. Members of the crowd described her performance as “a beautiful honor” and “the drop of a pin could have been heard while she sang”. The day ended with the drawing for raffle tickets that were sold at the golf tournament the week prior. Winners of the raffle received prizes such as $1,000 cash, a trip to Hawaii, or a custom golf cart donated by A & A Golf Carts of Leland.

Hulser stated there were more people in attendance than last year and approximately $40,000 was raised. This amount was almost double what was raised last year. All proceeds went the DAV as a way to give back to the veterans and families of veterans within the greater Wilmington area.

ABOUT DISABLED AMERICAN VETERANS
The Disabled American Veterans (DAV) is an all volunteer, non-profit that supports veterans and families of veterans. Organization supports Brunswick, New Hanover, and Pender Counties with almost 100% of donations going to veterans in need.

ABOUT COMPASS POINTE
Compass Pointe is a gated, residential community only 10 minutes from historic downtown Wilmington, North Carolina. The master-planned community offers luxury homes and resort style amenities. The community is currently home to approximately 500 residents and has plans for more than 2,000 homes. 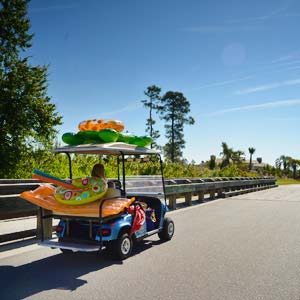