Annual holiday event on November 28 to include parade, fireworks show for the entire family

VIERA, Fla. (November 24, 2015) – The Viera Community Institute is gearing up for its third annual Light Up Viera holiday parade to take place on November 28.  Five marching bands, 18 brightly decorated floats, dozens of costumed walkers in lights and many other interactive elements will showcase the magic of the holiday season. The parade starts at 6 p.m. in Viera, and the route will loop from Veterans Way to Breslay Drive around Tavistock Drive to Viera Boulevard, then to Stadium Parkway for the grand finale at Space Coast Stadium with a magnificent fireworks show at 8 p.m.

The stadium will have holiday-themed arts and crafts, kickball on the field, meet and greets with Santa, characters from the movie ‘Frozen’, live music, kids crafts and table vendors for people to enjoy after the parade. Approximately eight food trucks will be stationed in the parking lot of Space Coast Stadium, offering a variety of snacks for purchase for adults and children alike.

A new addition to this year’s Light Up Viera parade is the Battle of the Bands, featuring marching bands from Rockledge High School, Viera High School, Satellite High School, Astronaut High School, and Heritage High School. The bands will compete with a one-minute performance in front of the parade grandstand, as well as along the parade route. The Viera Community Institute has donated $1,500 to all five of the music programs participating in the battle, and the winner of the contest will receive an additional $1,500.

This year’s theme, Moments of Magic, will highlight the songs of the holidays and special sing-a-long holiday song cards will be available along the parade route. Participants are encouraged to sing-a-long with the floats when they stop.

“From the parade to the fireworks show, this year’s Light Up Viera parade is going to be a spectacular way to ring in the holiday season with your family and friends,” said Lauri Duda, Vice President of The Viera Community Institute. “We’ve been working hard on the showmanship and creativity to make this year’s activities more interactive and imaginative than ever before. We hope to see you there!” 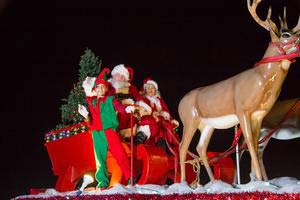