Chapel Hill, NC (October 28, 2015) - 25 years ago, golfing legend Jack Nicklaus played the first round on the brand new Signature Course that he personally designed in Chapel Hill, NC. On September 29, 2015, he and his wife Barbara returned to celebrate the Silver Anniversary of the Governors Club course.

Nicklaus toured all 27 holes of the course during the day, while in the evening a Silver Celebration Dinner was held to honor "The Golden Bear". In attendance at the dinner were over 250 club members and local dignitaries including Chris Ehrenfeld and Jill Ehrenfeld, owners of Governors Club Realty, the onsite real estate agency for the Governors Club neighborhood.

Another special guest, the Golf Channel’s Gary Williams, was also on hand for a Q&A with Nicklaus. During the event, Williams also introduced Barbara Nicklaus, the 2015 winner of the Bob Jones Award, the USGA’s highest honor. Jack won this award in 1975, making them the only couple to have ever won the award.

At the Silver Celebration Dinner, Governors Club officials also announced that the Jack Nicklaus Signature course had been awarded the Distinguished Emerald Club of the World award, a designation given to the top 5 percent of clubs in the world by BoardRoom magazine, a trade publications serving private clubs around the world.

Governors Club is a stunning golf course that follows the natural contours of Edwards Mountain and winds through Governors Club neighborhoods, creating spectacular course views for many of the homes. The championship course is also a U.S. Open Regional Qualifying Site.

Nicklaus, considered by many to be the greatest professional golfer ever, won 18 major championships during his 25 year career. He also racked up 19 second-place finishes and 9 third-place finishes in major tournaments. With 73 victories, he is third on the all-time winners list behind Sam Snead (82) and Tiger Woods (79).

Not only is Nicklaus a golfing legend, but he also is a man of vision who, 25 years ago, helped make Governors Club one of the premier gated communities in the nation.

About Governors Club
A 27-hole Jack Nicklaus Signature Golf Course highlights this gated community in North Carolina's prosperous Research Triangle metropolitan area. Governors Club combines a family-friendly, neighborhood atmosphere with the social and recreational benefits of a private country club. Members have access to golf, tennis, fitness, swimming and clubhouse facilities with over 400 events a year, plus boating and fishing on nearby Jordan Lake. Lots priced from $50,000 to $500,000+; Homes from $400,000 to $3 million+. 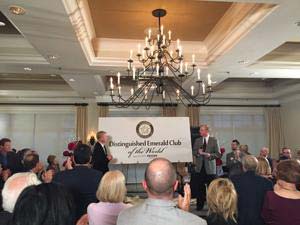