DOVER, DE (May 23, 19) – Noble’s Pond, Delaware’s premier 55+ Active Adult Community, has won six Regal Awards from the Home Builders Association of Delaware (HBA/DE) for excellence in home building, interior design, and community development.  An annual tradition for over 25 years, the Regal Awards are given to spotlight outstanding achievements in the state’s home building industry.  The awards were presented at the annual Regal Awards ceremony earlier this month.

For the second year in a row, Noble’s Pond was named Kent County Community of the Year, and also won Best Design Studio.  Rebecca Allicock, who was named Rookie Salesman of the Year in 2018, continued her streak by winning Sales Person of the Year and being named to the Platinum Level of the Million Dollar Sales Club.  Several home designs were also recognized for their design and interior merchandising.  The full list of awards is below:

• Community of the Year – Noble’s Pond

“All of us at Noble’s Pond are thrilled with this recognition by our home building peers at HBA/DE,” said Justin Olear, vice president of Noble’s Pond.  “We have worked hard to create a beautiful and enjoyable community for active adults with an inviting social atmosphere and homes that offer the design, style and features our residents want.  I’m extremely proud to say that Noble’s Pond has been named Kent County Community of the Year several times, but it never gets old!  It’s very gratifying to have our community honored this way by the HBA/DE.”

Award-winning Noble’s Pond is Delaware’s premier 55+ active lifestyle community.  Built and developed by Harry Miller III, a third-generation home builder and president of Regal Builders, Noble’s Pond features beautiful new single-family homes with a variety of well-designed, customizable floor plans.  The development is situated on 300 acres of bucolic farmland just outside Dover, the state’s charming capital, with fine restaurants, culture and history.  The acclaimed master-planned community offers top amenities including a beautifully appointed clubhouse, a large outdoor pool, bocce courts, a putting green, tennis and pickle ball courts, a five-acre pond with a pier and observation deck, natural walking trails and a community garden.  A hallmark of life at Noble’s Pond is charitable involvement and support.  Throughout the year, the community hosts fundraising events and provides opportunities for individual residents to volunteer their time in support of a number of non-profit organizations.

About the Home Builders Association of Delaware

Founded in 1947, HBA/DE strives to protect and preserve housing as a symbol of America.  As a non-profit state affiliate of the National Association of Home Builders, HBA/DE advocates for Delaware home builders, remodelers and supporting businesses in the building industry.  The organization is comprised of over 6,000 employees in the housing, development and real estate communities, making up a substantial portion of the workforce and touching virtually every aspect of the Delaware economy. 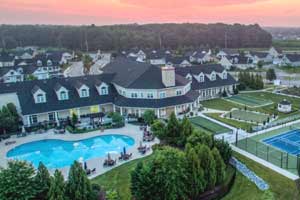