With British West Indies influences, the open-concept Carlotta will feature three bedrooms, two bathrooms, clubroom, large lanai, three-car garage and a master suite with two large walk-in closets. The never-before-seen floor plan is among several new plans by the premier builder that are now available at Country Club East. The Carlotta is slated to open in mid 2019.

“We are excited to debut this new California-inspired design to the marketplace,” said Randy Turkovics, president of Neal Signature Homes. “Our team worked with outside architects from the west coast to introduce a fresh and innovative version of the open-concept plan to our offerings. From 12-foot ceilings to unparalleled outdoor living and unique pool designs, this model will have a distinctive presence with all the amenities that true golf and country club living has to offer.”

The Carlotta will be offered in the Highlands neighborhood along with two other new plans, including the Bellevista II and Lugano. These floor plans join the existing 2,451-square-foot Entrare and the 2,393-square-foot Montecito at the community.

“This truly livable and spacious floor plan draws you outdoors with its fireplace and alfresco kitchen,” said Kathy Cioffi, vice president of design at Neal Communities. “The architecture of the these stately designs pay homage to the flair of Florida’s influences and also incorporates the inspired British West Indies styles that homebuyers love.”

Neal Signature Homes in Country Club East offers home sites with close proximity to the two community clubhouses and an 18-hole Rick Robbins golf course. Located in the heart of Lakewood Ranch, Country Club East is inside one of the fastest-selling communities in the country and close to a wealth of world-class destinations, including shopping, athletic facilities and the sought-after beaches of Sarasota.

Neal Signature Homes is a luxury homebuilder currently building in South Hillsborough, Sarasota and Manatee counties. The company is completely integrated to benefit its customers, with its engineering and building team, plus Charlene Neal PureStyle design services and Waterscapes Pools & Spas, the fifth largest pool company in the state. Neal Signature Homes’ honors and accolades include Aurora Awards for models in The Country Club at Lakewood Ranch and Country Club East and many Parade of Homes awards from the Manatee-Sarasota Building Industry Association. 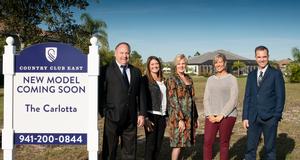