Sylva, NC (June 15, 2018) — Balsam Mountain Preserve, a conservation-oriented residential community in the Blue Ridge Mountains, announced it has acquired a 2,000-acre fee under the conservation easement within the property. Included in the easement is the majority of land surrounding the homes, Club facilities and upcoming new Doubletop Village - a new mountain hamlet of dining and recreational amenities currently under development and scheduled to open in early 2020.

The acquisition will allow the Balsam community to utilize the easement to its fullest potential, including eco-education opportunities for residents and scientific studies managed by the Balsam Mountain Trust, a non profit 501 c3 resident on the property, in partnership with both local and regional groups. Often described as a ‘community within a park,’ Balsam Mountain Preserve is set on 4,400-acres of which seventy five percent is under conservation easement, making it the lowest density residential community in the Southeast.

“Owning the rights to the conservation easement land within the Balsam community has always been a high priority for us,” states owner Ken Bowdon. “It not only is further testament to Balsam’s conservation ethos, but it also presents educational, recreational and accessibility opportunities that benefit the entire community.”

The transaction closed in April of 2018. With the acquisition complete, Balsam now has more flexibility to pursue different recreational initiatives, including expanding trail networks for hikers and the Preserve’s equestrian program, greater access to class A trout streams, and gaining further access and rights to expand its ecological research. One such research project could compare new forest growth on the Preserve to the old growth forest in the neighboring Nantahala National Forest.

Bowdon and Balsam Mountain Preserve will now work directly with the North American Land Trust (NALT), which serves as the governing board, to create a master plan of how to best utilize the easement to explore the area’s biodiversity and cultural heritage and then oversee its implementation.

Balsam Mountain Preserve
Balsam Mountain Preserve is a low-density, conservation-orientated private residential community set on 4,400 acres in the North Carolina Blue Ridge Mountains near Asheville. Surrounded by the Nantahala National Forest, the Pisgah National Forest and the Great Smoky Mountains National Park, Balsam Mountain Preserve was created as a “community within a park.” With an ethos centered on land-stewardship, seventy-five percent (3,400 acres) of the property has been placed in a permanent conservation easement, ensuring the preservation of its present park-like state in perpetuity. Refined amenities of the community include an Arnold Palmer Signature golf course, equestrian center, sports & wellness center, pool, nature center, tennis courts, guided hiking, fishing and camping opportunities, gathering house and food & beverage offerings. The new Doubletop Village, currently under construction, will consist of a grouping of stunning club facilities featuring a new Members’ Grille with a wine room, private dining room and an expansive terrace for outdoor dining. The Grille will overlook the practice park, golf course, valleys and mountains beyond. Across the courtyard, the Club Tavern will offer casual indoor and outdoor restaurant service. The Village will also feature a General Store and Golf House, as well as an Organic Garden, Great Lawn for bocce, croquet, badminton, putting green and other sports. 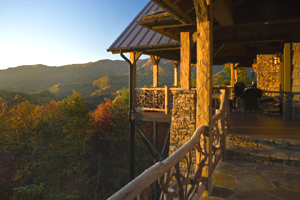