“Partnering with the Rachael Ray Home Collection allows homebuyers to benefit from the talents of two great brands during their home search process,” says Emily Scandy of PulteGroup’s Interior Design Team. “Rachael Ray’s three distinct collections are inviting, functional, and a great value. Whether you’re a millennial, an empty nester, or a growing family, the various pieces from the Rachael Ray Home collection are sure to resonate with your housing and lifestyle needs.”

“I have a genuine love of all things design and always want everyone to feel as welcomed home by their own spaces as I do when I enter mine,” said Rachael Ray.  “I am excited to be working with PulteGroup who will be helping me showcase something I am so very proud of – furniture that I created that is not only genuinely beautiful, but beautifully crafted.”

PulteGroup’s Interior Design team is one of the largest interior design firms in the nation, merchandising more than 400 new homes and covering more than one million square feet in 2016. The Interiors Team is currently identifying opportunities to merchandise additional model homes in 2017.

About Rachael Ray
Rachael Ray is best known as the host of the hit syndicated Emmy Award winning daytime television show “Rachael Ray” produced by CBS Television Distribution in association with Harpo Productions, Scripps Networks and Watch Entertainment. Rachael's warmth, energy, and boundless curiosity also reach millions of fans through her popular Food Network shows, lifestyle magazine Rachael Ray Every Day, bestselling cookbooks, digital home base, signature line of cookware, meal transport products and pantry products.  In 2007, Rachael launched the Yum-o! organization, a non-profit organization dedicated to empowering kids and their families to develop healthy relationships with food and cooking and in 2008 she partnered with Ainsworth Pet Nutrition to create a line of pet food with a portion of the proceeds being donated to organizations that help animals in need.

About PulteGroup, Inc.
PulteGroup, Inc. (NYSE: PHM), based in Atlanta, Georgia, is one of America’s largest homebuilding companies with operations in approximately 50 markets throughout the country.  Through its brand portfolio that includes Centex, Pulte Homes, Del Webb, DiVosta Homes and John Wieland Homes and Neighborhoods, the company is one of the industry’s most versatile homebuilders able to meet the needs of multiple buyer groups and respond to changing consumer demand.  PulteGroup conducts extensive research to provide homebuyers with innovative solutions and consumer inspired homes and communities to make lives better. 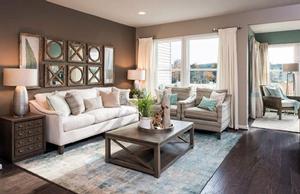