White Sulpher Springs, WV (May 2, 2014) - It was a thrilling end to the 2014 Masters for Greenbrier Sporting Club Member Bubba Watson on Sunday, April 13th as he finished 8 under, and slipped on his second Green Jacket at Augusta National.

After a trip to Waffle House, and a “few” media appearances, Bubba and his wife Angie headed up to West Virginia to relax after his momentous victory and to also join their Sporting Club family in celebration. On Friday, April 18th, over 200 Members joined Bubba and Angie for a very special Happy Hour on The Event Lawn. Menu fare included Waffle House inspired Grilled Cheese, Masters Pimento Cheese, and sugar cookies equally inspired by the tournament. Members also had the opportunity to be one-on-one with the winner, and congratulate him on his historical, and well deserved achievement.

About Greenbrier
The Greenbrier Sporting Club is a private residential sporting community and equity club on the 10,000-acre grounds of the legendary Greenbrier, developed by the Greenbrier Hotel Corporation. Members enjoy access to an array of private amenities including a Members’ Lodge, award-winning golf at The Snead – an 18-hole Tom Fazio-designed golf course, Eastern-inspired spa (Ananda in the Alleghenies), full-service equestrian center, sports complex with infinity pool, indoor squash courts and 25-foot climbing wall. Members also indulge in exclusive mountaintop amenities at Greenbrier Summit Village and so much more. Home ownership at The Greenbrier Sporting Club also means complete access to more than 50 amenities and activities at The Greenbrier resort, including three championship golf courses, The Old White TPC, The Greenbrier and The Meadows.

Image: Here is Bubba Watson wearing his Green Jacket, pictured with THE first ever Green Jacket! Sam Snead’s Masters jacket is the only one found outside of Augusta, GA and is part of our Snead memorabilia at The Sporting Club Lodge. We love this photo as it also shows Snead making his remarks after his Masters’ win. 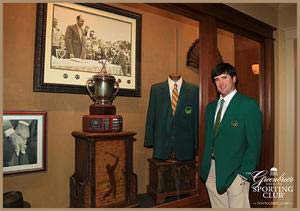