Miromar Lakes has partnered with Gulf Coast Swim Team for the  Open Water Festival which this year includes an international race and the Florida Open Water Swimming Championships. The festival also features short races and fun-filled events for swimmers of all ages and spectators are welcome.

This year’s inaugural Crippen Cup 10K Marathon Invitational invites participation from the top men’s and women’s swimmers from the United States and the top 25 finishers from the World Championships and the World Cup.  The men’s race begins at 9 a.m. Saturday, April 12 with the women’s race at 11 a.m.  There is a $10,000 total cash purse to be awarded.  The late Fran Crippen was one of the top open water swimmers of all time.

Miromar’s vast 700 acre freshwater lake has been selected as the host site for the USA Swimming, Nautique Boats national wakeboarding team, international photo shoots and more. The lake is the backdrop for the Southwest Florida Wine & Food Fest Grand Tasting and Auction and is enjoyed by residents for water skiing, fishing, kayaking, sailing and social events at the waterfront Beach Club.

The private resort-style community offers the finest amenities including the 700 acre freshwater lake, three miles of private, white sandy beach, a full service European Spa and Fitness Center, 7 Har-Tru Tennis Courts and Southwest Florida’s only Arthur Hills “signature” championship golf course.  Miromar Lakes is the only community in Southwest Florida to offer waterfront living, beaches and golf all within one luxurious location. New homes are available from the $600’s to over $5 Million.  Visit Miromar Lakes, Florida, just north of Naples, at exit 123 off I-75. For more information, please contact the Sales Center at Miromar Lakes Beach & Golf Club at (239) 425-2340 or (877) 809-9444.

Photo: Swimmers complete a lap off the beach at Miromar Lakes 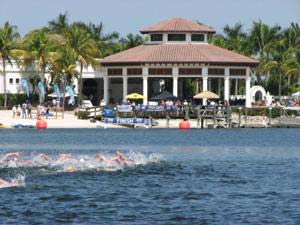