Charleston won the Colonial Athletic Association Men’s Golf Championship for the sixth time since 2014 with a tournament-record 27-under performance in the 54-hole Championship at the Dataw Island Cotton Dike Course.

The Cougars pulled away on the final day to win the event by 19 shots over second-place UNCW. Drexel finished third, Elon placed fourth, and Delaware was fifth. Towson, William & Mary, and Hofstra rounded out the team scoring.

Charleston’s Kieron van Wyk earned individual medalist honors at 13-under, tying teammate Zach Reuland’s tournament record from a year ago. van Wyk was ahead of teammate Nevill Ruiter by three shots (-10), while UNCW’s Walker Isley was third at 5-under. Reuland and Drexel’s Drue Nicholas were tied for fourth at 4-under.

The Cougars have won six of the last eight conference titles, with a back-to-back in the two Championships played at Dataw. Charleston previously won four straight championships from 2014-17 with the first three at the Clubs at St. James in North Carolina and the 2017 title earned at Salisbury.

Charleston will learn its destination for the NCAA Men’s Golf Championship when the selection show is held Wednesday, May 4 at 4 p.m. on GOLF Channel. 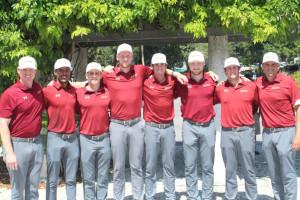