The 2022 USCA GC Southeast Regional was contested in the South Carolina Lowcountry at Dataw Island, Sun City, and Spring Island this weekend during four glorious spring days (April 21 – 24, 2022).  The event featured singles and doubles competition play on the five tournament croquet lawns at the three Clubs.

A full field of players traveled from North Carolina, Georgia, Florida, to join the South Carolina based competitors in this regional event, including two players from Dataw Island – Ray Barrett and Jack Howard.

Players from around the Southeast expressed their joy at playing in the Lowcountry, including Tournament Director and United States Croquet Association President Damon Bidencope:

“The setting is spectacular and equally matched by the warmth, efficiency, and enthusiasm of your croquet playing members!  This combination meant that players no matter their individual results could not help but to smile and enjoy croquet at Dataw Island."

In total, 173 individual games were contested at the three host venues over the four-day tournament.

“The USCA is a terrific outfit, representing the best US Croquet players,” says Dataw Island General Manager Ted Bartlett. “We truly enjoyed hosting this prestigious event; the players were a joy and the leadership and volunteers assured that it not only ran smoothly, but that everyone felt welcomed. Truly the Dataw way!”

Bidencope added, "The event would not have been possible without the support and contributions from each of these host venues and the organizing committees.  The great competitive games and comradeship was made possible by the setting and the host members.  Thank you to Doug MacMullin and Jim Podraza at Sun City, Geoff Hargadon, Ryan Good, and Jay Gratton at Spring Island, and the Dataw Island team of Janice Sands, Pat Stolte, Miriam Kelley, Ellen Kemp, Jack Howard, Ted Bartlett, Alvin Thurman and many others that made all the participants welcome and the event a great success."

"It was so enjoyable," Bidencope says, "it was with reluctance on Sunday to head home. All the visiting players from across the Southeast Region enjoyed the event tremendously.”

Thank you to all the volunteers, players, and supporters who came together to help Dataw Island and the Lowcountry shine! 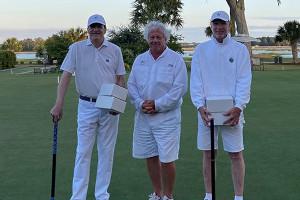