HERNANDO – Daniel Debra and Don Whittemore captured their second consecutive Senior/MidAmateur Four-Ball Championship Sunday, March 13, 2022, at Skyview at Terra Vista. Debra and Whittemore fired rounds of 66-68—134, 10 under, to get into a playoff against Matthew Galloway and Paul Royak. The duo survived an eight-hole playoff eventually making a birdie on the eighth hole to win.

Debra and Whittemore opened the tournament with an impressive 6-under 66 in tough windy conditions, to take the overnight lead into Sunday. The pair went out in 2-under 34 on the front nine on Sunday, moving them to 8-under for the tournament.

On the 15th hole, Debra hit the flagstick with his second shot from 230 yards to leave himself a tap in for eagle to move to 10-under. The playoff began on the first hole and continued forward as the two teams continued to match each other. On the eighth hole, Whittemore hit a shot from the fairway bunker to about 20 feet above the hole. After Galloway and Royak finished the hole with par, Whittemore rolled in the 20 footer to take home the championship and back-toback wins in this event.

Royak and Galloway fired a final-day 65 to pair with their opening 69, to move up eight spots on the leaderboard and get into the playoff. The duo finished the weekend with a runner-up finish. Three teams finished the championship in a tie for third: Mark Hanenberger/Brian Brown, Matthew Giovannelli/ Steve Humphrey and Brian Keenan/Joe Alfieri. 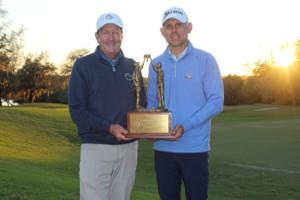