“Life was good to Mom and Dad,” says daughter Anne McCaffrey of her late parents, Alan and Joanne Moses. “Their lives were better than they expected or felt that any one person deserved. Their greatest joy in life was to give back, most of which they did quite quietly, never feeling that any fanfare was warranted.”

Alan & Joanne Moses lived humbly and felt that recognition was unnecessary, yet many individuals – and generations to come – have and will continue to reap the rewards of their generosity. Their philanthropy included contributions to many local organizations, both monetarily and through action. A major contribution made here on Dataw Island was their generous purchase and subsequent donation of Oak Island, the 33-acre maritime nature preserve connected to Dataw Island by a bridge.

Oak Island had long stood as an unofficial park used as greenspace for exercising dogs and communing with nature, until a series of sales and transfers landed it for sale with the entrance emblazoned with chains and a hostile “NO TRESPASSING” sign. Understandably, many Dataw Island residents were saddened by this closure. “No trespassing” meant no more morning coffee on the pier. No more dog walks in the woods. No more Oak Island… Or, so it seemed.

Joanne Moses was among those who was left bereft about the closure, but the Moses family is one of action.

McCaffrey tells of the day the idea was born, “My mom and my husband, Pat, were talking, and she was just saying what a shame it was to lose Oak Island and that Dataw Island should own it. My husband nonchalantly said, ‘Well, then make it happen.’ And, the idea was planted.”

While it did not take long for Joanne Moses to decide to purchase Oak Island for the community to enjoy, it was a formidable process; and, she dove in headlong. Her daughter Anne and son-in-law Pat were instrumental in negotiating the purchase and preservation easements, the donation and terms, coordinating with the Beaufort Country Open Land Trust. This 80-something-year-old widow, aided by Anne and Pat, joyfully and for the good of her neighbors coordinated this anonymous and tremendous deal as a tribute to her late husband, Alan. After months of negotiations and legwork, the island was simultaneously purchased and anonymously transferred to the Dataw Island Owners Association (DIOA) in February, 2020.

Members were abuzz about the donation – elated to have this resource preserved, in awe of the generosity, and, intrigued by who might be behind this benevolent act. McCaffrey noted one email her mom was particularly charmed by. “One member suggested that instead of trying to figure out who the donors are, we should all look at our neighbors as if each of them was ‘the one’ and show everyone around us some love, and even cut them a little slack.”

Appreciation and gratitude for their generosity runs deep throughout the community. One member, Rebecca Sprecher, who enjoys frequent dog walks to Oak Island, encapsulates what many of us feel when she says “They have given us a cathedral of trees, a stunning gift that will enhance the lives of generations to come.”

Continuing, Sprecher explains, “So many people chose Dataw because of its extraordinary natural beauty. Through this remarkable vision and selfless act, we now have a green space for all to enjoy. Functioning a little like Dataw’s Central Park, Oak Island provides not only habitat for wildlife, but a place where our residents (including the furry ones) can go to nourish both the body and the spirit.”

Joanne and Alan Moses came from very modest backgrounds and were both graced by college scholarships. Grateful for this hand-up that they looked at as “help from strangers,” both dedicated much of their lives to paying it forward to others. Their generosity stretches deep into the Beaufort community, which they made their home since moving to Dataw Island in 1989. The couple has funded scholarships, supported healthcare initiatives, and been great supporters of several Beaufort-area organizations. However, you won’t often see their names listed as anything but “Anonymous Donor.”

In addition to financial support that they provided many non-profits, Alan and Joanne Moses were equally at home rolling up their sleeves and helping out. They both served on several boards of directors, and Alan even took up a “retirement volunteer job” as the caretaker for Chapel of Ease for several years, maintaining the landscape, fixing stonework, and as the de facto man-in-charge, he was even asked to schedule weddings! The family thought this last assignment was pretty funny, but in typical fashion, Alan Moses was glad to serve the people and area they loved.

“Mom and Dad just loved everything about Beaufort and Dataw Island,” says McCaffrey. “They loved the people in Beaufort and on Dataw, and they thought highly of the Dataw management team. They felt very blessed to be able to live the life they had been given and to share that with others in any way possible.”

Through one of their selfless acts, the Dataw Island community could again, and this time forever, enjoy Oak Island.

“They both thought that they were the luckiest people on earth,” says McCaffrey.

Here on Dataw Island, we feel the same about Joanne and Alan Moses. Thank you, in memoriam, for being a revered part of our community, for all you have done in Beaufort and beyond, and especially, for sharing these golden years of your lives with us. 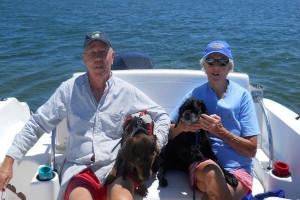