HERNANDO, Fl. - Noah Kent and Siuue Wu both earned a Florida Junior Tour (FJT) victory Sunday, March 6th, shooting 71 and 70, respectively, to close out the tournament. The Florida Junior Tour is the premier championship for junior golfers in the Southeastern U.S. It was Kent's first FJT victory and Wu's fourth FJT victory. Skyview at Terra Vista proved to be a tremendous test of the juniors, yielding only 11 rounds under par out of 154.

On March 5th and 6th, amateur junior golfers age 16-18 competed to play 36 holes of individual gross stroke play competitively with some of the state’s most accomplished junior golfers at Skyview at Terra Vista golf course in Citrus County.

Boys (16-18)
Kent, of Naples, got off to a strong start in the tournament, firing a 2-under par 70 on Saturday. That round was good enough to put him in the final pairing, tied with Chase Carroll, of Jacksonville, who also shot 70 on Saturday. The two stood on the 16th tee tied. A bogey blemish from Carroll on the Par 3 16th was the difference. Kent finished Sunday's round with a 1-under 71, edging out Caroll, who shot an even-par 72, by one stroke.

Carter Dill, of Tampa, claimed third-place Sunday, posting rounds of 74-71 to finish 1-over for the tournament.

Girls (16-18)
Wu, of Champions Gate, had a bogey-free round of 69 (-3) on Saturday. Entering the final round with a two shot lead, Wu carded five birdies on Sunday en route to her fourth win on the Florida Junior Tour since October 2021. Her 2-under 70 gave her a cozy 5 stroke victory. 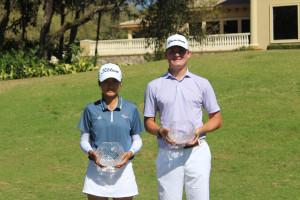