Beaufort High School Football gathered for their Annual Banquet on Dataw Island Wednesday to celebrate a great season, in which they were the state’s runner-up. Although the entire team worked hard for these wins, one team member, John Asher Howell, was additionally recognized as this year’s recipient of the “Jonathan Peck Skills for Life” award. The award honored Howell’s academic and social achievements, recognizing his positive attitude, perseverance and academic achievement.

BHS players, coaches, school administrators, and parents, gathered in the Carolina Ballroom for a banquet and dinner sponsored by Dataw Island members. The private gated community and Beaufort High School Athletics have a special connection – many members enjoy supporting our local student athletes, attend games to cheer on their home crowd, and offer their support to these students. Each spring, the members pool resources to host the BHS Football Banquet.

Dataw Island member and football supporter Marilyn Peck congratulated the student athletes on an excellent season and, after spending time at her grandson’s football games, has a true appreciation for parents with football kids. At the banquet each year, Peck encourages players through a poem that was one of her husband’s favorites, “Invictus,” by William Ernest Henley.

Peck’s late husband, Jonathan Peck, was also an avid football supporter. In his honor, the Jonathan Peck Skills for Life Award is given every year. The Award recognizes an outstanding student athlete who exemplifies the traits that Jon Peck held dear, on and off the field: a positive attitude, ability to get along with everyone, spirituality, appearance, communication skills, and having a plan for improving themselves in academics and in life.

John Asher Howell, the 2022 winner of the Jonathan Peck Skills for Life Award, is an exceptional young man and athlete who is very invested in his future. Congratulations, John, for winning this prestigious award! 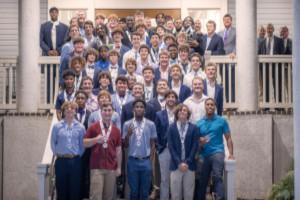