CITY OF WESTLAKE, FL – (February 17, 2022) — When it comes to building new homes in Palm Beach County, the City of Westlake led the way in 2021.  According to an annual report by the county’s planning department,  Westlake was issued 829 single-family home permits which far outpaced any of the 38 other municipalities.  The next closest city was Palm Beach Gardens with 313 permits.  Westlake represented well more than a third of all permits issued by municipalities which totaled 2,148.  The remaining permits were issued in unincorporated Palm Beach County.  In total, 4,674 permits for single-family homes were pulled countywide in 2021.

“I think the data speaks for itself,” said Mike Belmont, president of Minto Communities USA, the master developer and primary homebuilder in Westlake.  “The real estate market is very hot right now and people are gravitating to the quality of homes and lifestyle that we offer at Westlake.  They also want to be part of this exciting new city as it grows and evolves.”

In January 2022, Minto announced plans to introduce the first townhome neighborhood within the 3,800-acre community.  Four model homes are currently under construction in The Crossings of Westlake.  Sales will begin when the new models open later in the first quarter of 2022, and sales prices will be announced at that time.

Minto plans to build 130 luxury townhome residences from the newly created Bay Collection.   Three distinct floorplans—Aventura, Brickell and Biscayne—will feature either three bedrooms with 2.5 bathrooms or four bedrooms with 3.5 bathrooms.  Unit sizes range from 1,669 to 2,113 square feet under air.  There will be a mix of four- and five-unit buildings and three unique architectural styles for the exteriors—Coastal Contemporary, Modern Bermuda and Urban Transitional.

The Crossings is the sixth Minto neighborhood to be developed in Westlake.  Last summer, the company opened The Orchards with 358 single-family homes in phase one starting in the $400s, and The Estates, an enclave of 76 luxury homes on 75-foot homesites starting in the $500s.  Altogether, Westlake is approved for 4,500 homes and more than two-million square feet of non-residential space. Phase two construction of the Westlake Adventure Park is also under way.

Commercial development continues to boom as well.  The city council recently approved site plans for a new shopping center and cluster of restaurants known as the Shoppes of Westlake Landings, as well as a new family entertainment center known as Adrenaline World.  Construction on both projects is expected to start in 2022. A self-storage facility is also being planned for the 50-acre Westlake Landings business park.

In September, Chaudhary Petroleum Group opened a new concept 7-Eleven and gas station off Seminole Pratt Whitney Road that features a take-out/dine-in restaurant with made-to-order-food, a wine cellar with curated wines, and a nitro cold-brew and iced tea bar. A second 7-Eleven is set to open in the coming months.

Meanwhile, Publix recently broke ground on a multi-tenant retail center that will be anchored by a 50,000-square-foot grocery store, and Christ Fellowship Church has broken ground on an 800-seat worship center.

The Tax Collector’s office in Palm Beach County has finished construction on a new regional service center, which is set to open to the public later this month.

Westlake is located at 16610 Town Center Parkway North in the City of Westlake, on Seminole Pratt Whitney Road between Southern Blvd. and Northlake Blvd.  For more information on the community, call 888-299-3628 or visit www.WestlakeFL.com.

Minto Communities USA, based in Florida since 1978, has represented integrity, financial strength and enduring value for over 40 years. Minto builds exceptional new homes and communities to meet every lifestyle, with more than 30,000 new homes built in 48 communities. Minto is dedicated to continuous improvement in design, quality and customer experience.  These are just some of the elements that set Minto apart as an exceptional homebuilder and community developer and have earned the company national recognition that includes consistently high rankings from Eliant Customer Service Surveys. Minto has been recognized with multiple national awards from the National Association of Home Builders (NAHB) for community and home design, including Best Single-Family Community Over 100 Homes and Best Sales Center for Westlake in the City of Westlake; Best Mixed-Use Community and Best Clubhouse for The Isles of Collier Preserve in Naples, Florida; Best Clubhouse for the Harbour Isle Beach Club in Sarasota-Bradenton, Florida. Minto has also earned multiple Aurora Awards from the Southeast Building Conference for Westlake, including the 2018 Silver Award for Best Single-Family Residential Community. 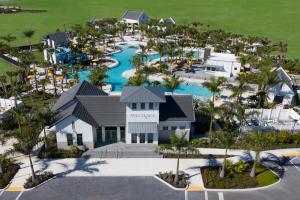