Week-Long Celebration of Service Benefits Wounded Veterans through Tee It Up for the Troops Raises $75,000+

The week began with a Silent Auction, and despite the harsh weather and rain, Sunday members lined the streets with 3,500 American flags. Following, a “Big Break” superintendent’s revenge-style golf tournament was played – also in the cold and rain. The day ended with a happy hour like none other… guest bartenders volunteer and raise money as attendees Tip It Up for the Troops at the Dataw Island Pub.

Monday eight staff came together to enjoy the famous Golf Marathon. Again lead by Director of Golf Chris Fearn, this year the new format had four teams playing a total of 288 holes from 8:30 am to around 4:30 – with pledges made per hole and/or per birdie and eagle. PGA HOPE (Helping Our Patriots Everywhere), the flagship military program of PGA REACH, hosted the first Lowcountry PGA Hope event as well Monday, treating wounded veterans to a fun round on the Tom Fazio Cotton Dike course.

Tuesday began with a March and Rally, where veterans and their supporters gathered for an interactive flag ceremony, complete with musical performances, the pledge, the presentation of the SC Governor’s Proclamation, presentation of the colors, and more. After the rally, a full field of golfers – including 75 guest veterans – competed in the Veterans Golf Classic & Cookout on both the Cotton Dike course and the Arthur Hills Morgan River course.

The week’s final event is perhaps one of the most special, as Dataw Island Veterans are honored at the Veterans Breakfast. The annual breakfast this year welcomed our guest speaker Dataw Island’s own Col. Chaplain Brainerd. And, in a tearful presentation in honor of his many years of service both in the military and as a veteran, the late Dave Luzzi was named Veteran of the Year.

Luzzi was a Specialist 4 in the Army Military Police Corps and he served as Tournament Director and Master of Ceremony for TIUFTT Veterans Golf Classic for many years. He was highly involved in the Adaptive Golf Experience-Parris Island program and was a huge supporter of the Tee It Up for the Troops program. He was known as the “golf buddy” and will be missed by his fellow members.

The TIUFTT Chairman for Dataw Island Phil Marshall says, “This week brings so many mixed emotions, some of deep sadness for those we have lost serving our great country. But at the same time, you feel so much joy seeing men and women who have served, thoroughly enjoying the camaraderie and of course the golf. This week on Dataw always brings out the best of everyone because we all know the freedoms we have that were provided by some giving some; but many giving all.” He goes on to say, “Thank you to the Dataw staff, the many volunteers, all the many donations from both on island and off who gave both monetary donations, services or products we could use in our silent auctions; a huge shout out goes to Butler Chrysler Dodge Jeep Ram for such a generous donation! Finally, the outpouring of kindness Dataw showed to the 119 disabled veterans who visited this week for both golf tournaments Monday and Tuesday. The work behind the scenes was tiring but, in the end, it is so rewarding. I told my wife Mary, my heart could not be any fuller. So, thank you Dataw and may God bless.”

ABOUT DATAW ISLAND
Dataw Island is a gated golf, tennis and boating lifestyle community located fifteen minutes outside of historic downtown Beaufort. The island features two recently-renovated golf courses by designers Tom Fazio and Arthur Hills, a tennis center, a full-service marina, Community Center with workout and massage facilities, three restaurants, world class croquet lawns, bocce, kayaking, pickleball, and more. The community has also been ranked the number one best retirement destination in South Carolina by Best Retirement Destinations and is the recipient of 2019 and 2020 “Best Golf Community” from Ideal-Living, as well as the “Club of the Year” (South Carolina Golf Association) and one of four private clubs named by USTA as an “Outstanding Tennis Facility.” www.dataw.com 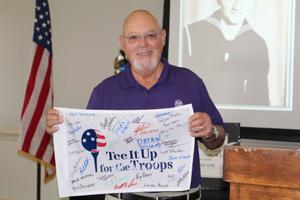