Beaufort, SC --- Once again, Dataw Island members and supporters have been hard at work planning a week-long celebration of service to benefit wounded veterans. Aiming to top last year’s donation of $68,000 to Tee It Up for the Troops, veterans and civilians alike have pledged support to be part of Veterans Week on Dataw Island.

The week began today with the commencement of the Silent Auction. being held in the lobby of the Carolina Ballroom.

Sunday starts with members lining the drive with 3,500 American flags, which is followed by a “Big Break” superintendent’s revenge-style golf tournament. The day will culminate with a happy hour like none other… guest bartenders volunteer and raise money as attendees Tip It Up for the Troops at the Dataw Island Pub. (Event is open to all members, guests of members, and invited special guests; no need to participate in the golf tournament to come on by and Tip It Up!)

Monday features the famous Golf Marathon. Again lead by Director of Golf Chris Fearn, this year a new format is being introduced to include a total of 8 golfers (including the Club’s General Manager, Ted Bartlett!) will together play a total of 288 holes from 8:30 am to around 4:30 – with pledges made per hole and/or per birdie and eagle. Come on out and cheer them on! Play will take place on both courses until 2:30, at which time the front 9 of the Tom Fazio Cotton Dike course will usher in very special guests for the PGA HOPE Lowcountry Challenge Golf Tournament, their first ever event for our region.

PGA HOPE (Helping Our Patriots Everywhere) is the flagship military program of PGA REACH, the charitable foundation of the PGA of America. In collaboration with the Department of Veterans Affairs, PGA HOPE introduces golf to Veterans with disabilities to enhance their physical, mental, social and emotional well-being. Learning and playing the game of golf is a proven activity that has helped thousands of military Veterans assimilate back into their community through the social interaction the game of golf provides.

Once the Rally culminates, a full field of golfers – including 75 guest veterans – will compete in the Veterans Golf Classic & Cookout on both the Cotton Dike course and the Arthur Hills Morgan River course.

The week’s final event is perhaps one of the most special, as Dataw Island Veterans are honored at the Veterans Breakfast. The annual breakfast will this year welcome as our speaker Dataw Island’s own Col. Chaplain Brainerd. These days found welcoming your guests at the Dataw Security Booth, Brainerd served 30 years as a Chaplain in the US Army, earning many awards and decorations throughout his time in the service.

“These men and women sacrifice so much for this country, and they deserve our full support,” says Fearn, “Whether that is donating to a good cause or just simply being there for a veteran and telling them ‘Thank you’ for their service and sacrifice.”

To show your support, the Dataw Island Golf Pro Shop is accepting pledges and donations throughout the week; you may Tip It Up Sunday at The Pub; pledge online; help line the streets with flags; salute our veterans at the March and Rally, and more. Let’s all salute our veterans this year in thanks for their service!

ABOUT DATAW ISLAND
Dataw Island is a gated golf, tennis and boating lifestyle community located fifteen minutes outside of historic downtown Beaufort. The island features two recently-renovated golf courses by designers Tom Fazio and Arthur Hills, a tennis center, a full-service marina, Community Center with workout and massage facilities, three restaurants, world class croquet lawns, bocce, kayaking, pickleball, and more. The community has also been ranked the number one best retirement destination in South Carolina by Best Retirement Destinations and is the recipient of 2019 and 2020 “Best Golf Community” from Ideal-Living, as well as the “Club of the Year” (South Carolina Golf Association) and one of four private clubs named by USTA as an “Outstanding Tennis Facility.” 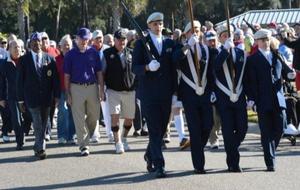