WEST PALM BEACH, Florida – The Club at Ibis has long had one of the top instructors in golf in Martin Hall. Now the high-end, private club has one of the most technologically-advanced ranges for Hall and the other PGA Professionals to work his magic.

“I could talk a half hour about how fantastic this place is,” Hall said. “It’s magical, amazing, inspirational … all of the above. It’s an absolute treasure chest for anybody who wants to try and get better at golf.

The club also debuted its Ibis Golf Academy featuring Martin Hall. The 66-year-old Hall has been at The Club at Ibis since 1997 and has done more than 350 episodes of School of Golf as Golf Channel’s lead instructor.

Hall conducted a one-hour clinic with Hall of Famer Annika Sorenstam to celebrate the new range. Fitting, because the 10-time major player performed like a machine while winning 72 LPGA Tour titles and 10 majors.

Sorenstam spoke about how when she started her career, there was almost no technology in the game. Now it’s everywhere.

“I wish I had something like this when I was growing up,” Sorenstam said. “I’ve never seen anything like this. It’s massive with lots of different targets and tees. Getting instant feedback is so important to improving your game.”

Now the Club at Ibis members can get access to the same level of information provided to the world’s best players. This technology should lead to lower scores and increased enjoyment.

ABOUT THE CLUB AT IBIS:
Ibis is a secure, gated collection of 33 distinctly different neighborhoods, located on the quiet edge of northern West Palm Beach and just minutes from the heart of the city. It is adjacent to the pristine Grassy Waters Nature Preserve, a 12,000-acre, state-protected preserve, with wildlife, birds, and tropical vegetation. The Clubhouse recently completed a major enhancement and expansion to include three new dining venues and banquet accommodations. A new Sports Village opened in 2014 to include fitness facilities, pools, a 4,500-square-foot spa, and a yoga wall. The 16 court Tennis Center holds friendly tournaments and weekly group play. Golf is center stage and offers 54 holes on three Nicklaus family-designed championship golf courses. Top golf instruction is headed by Martin Hall, ranked by Golf Digest as one of the game’s Top 50 instructors. For more information, call 561.625.8500 or visit www.clubatibis.com. 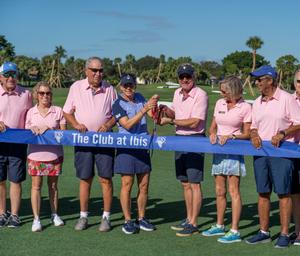