Despite challenges of virtual showings and economic uncertainty, demand for final homesites on exclusive Captain’s Island “off the charts”

Charleston, SC (June 5, 2020) - The final collection of homesites on Captain’s Island - an exclusive island neighborhood that is part of the award-winning master planned community of Daniel Island, was offered for sale on Thursday, May 21, and interest was exceptionally high. Daniel Island Real Estate received more than 59 contracts for the 32 homesites in the offering, requiring a drawing. Within an hour, all homesites had been spoken for.  Five years in the making, Captain's Island is a 90-acre property located directly across Ralston Creek on the north end of Daniel Island, within the City of Charleston. With fewer than 100 homesites, it’s among the most beautiful and last remaining property on Daniel Island to be developed for residential homes.

"We knew these were extraordinary homesites, but the tremendous amount of interest we received exceeded our expectations given the difficult time we're all living through right now. It was off the charts," said Jeff Leonard, Vice President of Sales and Broker-in-charge at Daniel Island Real Estate, the brokerage firm representing the developer and the property.  Leonard's team sold all 32 homesites - a total sales volume over $30 million. The offering included a mix of settings, including many deepwater and tidal creek sites and estate-sized marshfront sites with expansive views.

Captain's Island was envisioned and branded as a special waterfront settlement, apart from but connected to the "mainland" of Daniel Island by a short bridge. With unique architectural design principles and waterfront amenities exclusively for the 95 families who will live there, Captain's Island's plan was influenced by southern waterfront villages like Rockville, located south of Charleston, and the Old Village in nearby Mt. Pleasant.

"The idea of living on a small island with all the benefits of Daniel Island and Charleston nearby has appealed to both a national and local market of buyers. Our challenge during the past two months was sharing this vision and excitement ‘virtually’ to help buyers understand the context and attributes of these sites," said Carolyn Lancaster, Vice President of Marketing for DI Development Company, the group responsible for managing Daniel Island’s development. “In addition to first time purchasers, we also had a lot of interest from existing island residents, a testament to the appeal of the lifestyle here and this particular offering.”

The success of Captain’s Island marks one of the final chapters of the evolution of the community that has taken shape on Daniel Island over the past 25 years. Previously owned by the Harry Frank Guggenheim Foundation, which sponsored the creation of a comprehensive master plan for development of the island in the early 1990s, the 4,000 acre island has evolved into a vibrant destination and desirable residential address located in the heart of Charleston. Part of the City of Charleston, Daniel Island is home to traditional neighborhoods, award-winning golf and tennis facilities and an outstanding collection of amenities in a self-contained island town setting. Schools, churches, medical offices, boutiques, restaurants, banks, a supermarket, a professional tennis stadium and many other attractions and conveniences are integrated within the island’s central downtown, and winding rivers and creeks, hundreds of acres of parks, leisure trails and a private country club provide endless recreational options. Daniel Island has been honored with numerous accolades including a prestigious “Award for Excellence” by the Urban Land Institute. 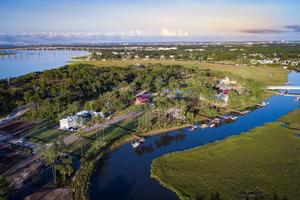