The Club at Ibis Collects Record 27,000 Pounds of Food and more than $15,000 in Annual Charity Food Drive

West Palm Beach, FL (February 7, 2020) - The Club at Ibis’ eighth annual Charity Food Drive was the best one yet. More than 27,000 pounds of food was collected by Ibis’ residents on January 26, along with over $15,000 in monetary donations.

More than 24,000 pounds of food was collected last year which means there was a 15% increase in 2020. This year, Ibis’ food drive benefited the Palm Beach County Food Bank and to Grove Park Elementary School in Palm Beach Gardens.

“The Palm Beach County Food Bank feeds 250,000 people a week, which is amazing,” said Richard Zodikoff, an Ibis resident who is the chairperson for the Food Drive.

“We’re thrilled to set a record this year. Like any charity, it’s very difficult to top what you have done the previous year. In past years we have given out two bags per household. This year we decided to give out three.”

Zodikoff said the Food Bank decides where most of the food will go, but some it will be directed to Grove Park Elementary School, which is just off Northlake on Military Trail, where 90% of the kids are at or below the poverty line.

“The sad part is our school systems provide breakfast and lunch, but not on weekends,” Zodikoff said. “Come the weekends, the kids have nothing.”

Ibis relies on supervisors and volunteers from each of its 33 communities to support the Food Drive. There are more than 125 volunteers, and Ibis’ employees also help by sorting the donated foods.

The nearby Publix also helps by highlighting “buy one, get one free” promotions to help increase what’s donated.

About The Club at Ibis

Ibis is a secure, gated collection of 33 distinctly different neighborhoods, located on the quiet edge of northern West Palm Beach and just minutes from the heart of the city. It is adjacent to the pristine Grassy Waters Nature Preserve, a 12,000-acre, state-protected preserve, with wildlife, birds, and tropical vegetation. The Clubhouse recently completed a major enhancement and expansion to include three new dining venues and banquet accommodations.  A new Sports Village opened in 2014 to include fitness facilities, pools, a 4,200-square-foot spa, and a yoga wall. The 16 court Tennis Center holds friendly tournaments and weekly group play.  Golf is center stage and offers 54 holes on three Nicklaus family-designed championship golf courses.  Top golf instruction is headed by Martin Hall, ranked by Golf Digest as one of the game’s Top 50 instructors. 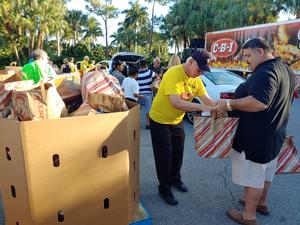