Viera, FL (November 15, 2019) –  They meet every morning at 7:00 AM to greet the sunrise and ride their bikes and recumbent trikes 7-10 miles inside Indian River Colony Club in Viera, the patriotic community with a culture of giving. But the 29 members of the Pickled Pedalers bicycle club find satisfaction in more than just a great morning ride and camaraderie. Each January, the group members start collecting loose change in mason jar banks, so that by year's end they can pool their resources to provide bicycles for disadvantaged children. This year, the Pickled Pedalers were happy to help Santa Claus and the Marine Toys for Tot program by purchasing 20 bicycles for boys and girls. This is the third year the group has donated bicycles to Toys for Tots. The Marine Toys for Tots program distributes an average of 18 million toys to 7 million less fortunate children annually. The golf course community of Indian River Colony Club is an official Toys for Tots drop off location.

The Pickled Pedalers group at Indian River Colony Club has donated to other charitable causes, but found that their own love of cycling made the ongoing bicycle donations to Toys for Tots particularly fitting.

“What a joy to imagine 20 surprised and happy kids on Christmas," said Pedaler Gloria Zannis.  "This annual tradition of buying and donating bikes is rewarding for all of the Pickled Pedalers.”

The bicycle club's name comes from the euphoric "pickled" feeling members experience when witnessing spectacular sunrises during their morning rides. Viera's very first neighborhood, Indian River Colony Club is known as "The Place Patriots Call Home."  A haven for military retirees, the par-72 private golf course community has a patriotic culture and country club amenities for active adults aged 55 and over. For more information about Indian River Colony Club, call 321-255-6000, visit their website at IndianRiverColonyClub.com or like their Facebook page at facebook.com/colonyclubinviera/.

PHOTO:  The Pickled Pedalers of Indian River Colony Club collected loose change throughout the year to purchase 20 bicycles for donation to the Marine Toys for Tots program. PHOTO BY AMIR PISHDAD JR.

About Indian River Colony Club –  Viera's very first neighborhood, Indian River Colony Club was originally conceived as a retirement destination for military retirees. IRCC began to take shape in 1986, its vision to create a private country club-like environment for members.  Membership has now expanded to include non-military personnel who want the energetic, patriotic lifestyle cultivated by three decades of members. Still predominantly a haven for military veterans, IRCC maintains a culture centered on service to others. IRCC is a gated golf course community of nearly 800 homes on 453 acres in Viera, owned entirely by its membership. “The Place Patriots Call Home” enjoys 24-hour gated security, a generous maintenance package and a full complement of newly renovated and 100% debt-free country club amenities for active adults aged 55 and over, including an 18-hole, par-72 private golf course designed by acclaimed Florida golf course architect, Gordon G. Lewis.  The patriotic neighborhood was named one of the 2018 Top 20 Golf Communities in North America by Golf Course Home Network. 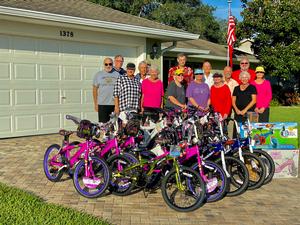