I am Ironman: Dataw Island member attempts his first Ironman competition at age 71, and after several bouts with cancer

“I thought I’d be more nervous,” McMahon stated in an interview prior to the race. “But you know what? I’ve trained. I’m here. Let the cards fall where they may.”

To earn the title of Ironman, participants must complete a grueling 2.4 mile swim in the Gulf of Mexico, ride 112 miles on bicycle, and run a full marathon – that’s 26.2 miles – on foot, all within a 17-hour timespan.

One of McMahon’s sons, Michael McMahon, has done several Ironman events and was the motivation for the elder McMahon to participate.

“Michael is a commander in the US Naval Special Forces and can do one of these in about 11 hours,” Bill McMahon said. “About five months ago he said to me, ‘You know what? Let’s do this together!’ and at first I thought that with all I’ve been through there would be no way. I talked to my doctors at Duke and locally and they said ‘go for it.’ They are, frankly, surprised I’m still alive. But, my numbers have been steady and even though I am due to start another round of chemo, they felt okay with me holding off.”

With how much he has been through, he attributes as much of his success to continuing to be active, as he does to the doctors, his family, and God.

And, McMahon has been through a lot.

In the last five and a half years, he has been through four surgeries and several serious treatments. His first diagnosis with melanoma came in 2014 and resulted in surgery to remove an 8 cm wide by 6 cm deep spot on the top of his head. Just one year later, hoping for a clean bill of health at a follow-up appointment, he instead learned that the cancer had spread to his back and lungs and had reached stage 4; Duke University included McMahon in a clinical trial using immunotherapy that saved his life. With a weakened immune system, in 2017 he was diagnosed an incurable disease called amyloidosis took hold in his left lung and he had to endure another round of chemo, and in 2018, he was again treated for melanoma. After the Iron Man, McMahon will begin yet another round of chemo.

Through it all, this warrior has never ceased to stay active, just like he has been for most of his life. He said that like many non-runners, McMahon used to think running was so boring that he’d never enjoy it – until he tried it. “Once I got into it, I realized that I feel great!” And, that was back in 1980. Since then, he has enjoyed numerous 10k runs and has even participated in the Beaufort River Swim, but nothing has compared to the intensity of training for an Ironman.

“Five days a week, several hours a day, I’m busy running, biking, or swimming. Thank God I live on Dataw where it’s safe to train outside, and thank God for my wife, Jackie, for being so helpful and understanding.” McMahon can occasionally be seen swimming in the outdoor pool on Dataw Island, but also trains on Hunting Island in waters that are more similar to the Gulf of Mexico; to see him out running or biking on Dataw, one only has to be up around 4:30 am and look for the blinking lights swooshing by. He adds, “Jackie is a great supporter and is really excited for me, but I know she’s got to be ready for it to be over. The training is intense, and she has really picked up a lot of what I normally would do in order to allow me to do this. It’s really a team effort.”

This will be McMahon’s first Ironman but not the first time he has considered it. In 2017, he intended to tackle the Ironman but then got too sick to train. He was glad, however, to still go volunteer and help others across the finish line. “There was one man from Chile” he recalls with a mist in his eye, “who I helped across the finish line. He was having a pretty rough go at that point but had made it so far and just need that extra little push to finish. When we crossed the line, he removed his bracelet and gave it to me, saying ‘we finished!’ I guess my help meant a lot to him.”

McMahon wears that bracelet still today, as an ongoing reminder of what commitment and a positive attitude can accomplish.

When McMahon steps out on Saturday, he will also be wearing another bracelet that is dear to him; it reads “Thy will be done.”

“When you are told you are dying, a lot goes through your mind. One of my first thoughts was, ‘God, I’m ready, if this is your will. But I’m not going out without a fight.’”

Although McMahon says that there have been times that he’s felt like he’s fighting a losing battle and it’s all he could do to just get up and be active, the power of God and support from his family keeps him focused and keeps him fighting.

Saturday morning at 7 am, McMahon will be joined in the race not only by his son Michael but also by Michael’s wife, with Jackie and their other two sons (Billy, from Ridgefield, Conn., and Jon, from Chicago) right there on the sidelines cheering them on.

“Here we go!” said McMahon. “I’m really excited to be able to attempt this. Just like golf or anything else though, some days you do great and others not so much – what happens, happens. I’m just happy to be here to do it.”

The team at Duke has affectionately nicknamed McMahon “Ironman.” To cheer on our Ironman throughout the day and night Saturday, follow his progress online by visiting their website www.ironman.com and pulling up bib #2985.

Dataw Island is a gated golf, tennis and boating lifestyle community located fifteen minutes outside of historic downtown Beaufort. The island features two recently-renovated golf courses by designers Tom Fazio and Arthur Hills, a tennis center, a community center with workout and massage facilities, three restaurants, world class croquet lawns, bocce, kayaking, and more. The community has also been ranked the number one best retirement destination in South Carolina by Best Retirement Destinations and is the recipient of the 2017 Bliss Award for “Happiest South Carolina Community” as well as the “2018 Club of the Year” (South Carolina Golf Association) and was named by USTA as an “Outstanding Tennis Facility.”? 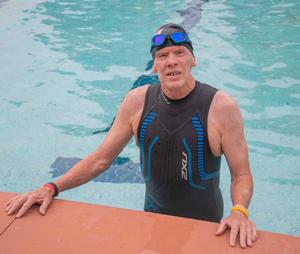