Teeing off at 3:30 am, Fearn played an astounding 251 holes of golf before sun-down, all in the name of raising funds for our veterans, through Tee It Up for the Troops, the beneficiary organization.

“It really is motivating to look over and see these guys here supporting me,” Fearn said. “I’m always so humbled for the opportunity to serve them in return for all they have done for us.”

Last year, Fearn was able to complete 227 holes, a feat that seemed unbeatable. Starting even earlier this year and playing with glow-in-the-dark balls and the lights shines by golf carts and flashlights, Fearn was determined to top his record. To keep it manageable pre-dawn, Fearn played holes #1 and #2 of the Morgan River repeatedly in the dark – a true test of patience and fortitude.

“I have to admit,” said Fearn, “Waking up at 2:45am and knowing that I'm about to play golf for 14 hours straight, with the first three-plus hours in the dark, is a little daunting, but it's still a lot of fun since I know it’s for a great cause.”

Members and supporters pledged their choice of a per-hole amount or a flat amount, with the per-hole promises serving to encourage Fearn even more to complete as many holes as his body and daylight would allow. Each birdie and eagle he makes also increase the take, so playing fast and accurately are both goals. His 251 holes included a remarkable 42 birdies and 2 eagles.

“Having members and veterans there cheering me on is really what keeps me going,” he said. “Although it takes me a few days to recover afterwards, it’s a small sacrifice that I’m happy to make in the make of Tee It Up for the Troops.”

“The entire event last year from my marathon, guest bartending, raffles, selling hats, and the event on Tuesday raised just over $70,000 -- which is a huge record at Dataw. The goal is for us to beat that every year.”

The week-long celebration of service began Saturday evening with Guest Bartender night at the Pub, and continued Sunday with member volunteers lining the streets of Dataw with 3500 American flags. Monday started early with the Marathon and the day concluded with a dinner reception in the Gazebo, honoring veterans. Tuesday morning was rained out but the annual Veterans Luncheon – a tradition that is a beautiful tribute to all of the veterans on Dataw Island as well as a guest speaker, this year Brett Simon, the president of K9s for Warriors. K9s For Warriors is the largest service dog provider for post 9/11 veterans suffering from PTSD, and after his informational presentation, which touched the hearts of those in attendance, the Dataw Island Quilters honored Simon with a handmade Quilt of Valor.

Representatives from the OnCourse Foundation recognized Dataw members for continued support, noting that Dataw Island was one of their first supporters and how grateful they are.

The event, emceed by Dave Luzzi, also included a silent auction, presented by Larry Beidleman, and in closing, GM Ted Bartlett announced an award given to Dataw Island members from Tee It Up For The Troops, given for all the support Dataw Island has provided over the years.

Luzzi summed up the week well when he stated emphatically, “It’s all for you, you are the reason we do this.”

The week-long festivities conclude tomorrow with the Veterans Breakfast, which this year honors three very special veterans, Dataw Island members who served in World War II. These gentlemen: Leonard Christ, Greg Shorey, and Robert Walmsley, are true American heroes and we look forward to thanking them and recognizing their service.

“These men and women sacrifice so much for this country and they deserve our full support,” says Fearn, “Whether that is donating to a good cause or just simply being there for a veteran and telling them ‘Thank you’ for their service and sacrifice.”

To show your support, the Dataw Island Golf Pro Shop is accepting donations through the end the week.

Dataw Island is a gated golf, tennis and boating lifestyle community located fifteen minutes outside of historic downtown Beaufort. The island features two recently-renovated golf courses by designers Tom Fazio and Arthur Hills, a tennis center, a community center with workout and massage facilities, indoor and outdoor pools, three restaurants and impeccably-maintained croquet lawns. The community has also been ranked the number one best retirement destination in South Carolina by Best Retirement Destinations and is the recipient of the 2017 Bliss Award for “Happiest South Carolina Community” and a 2017 Recipient of the USTA Award for Top Tennis Facilities. 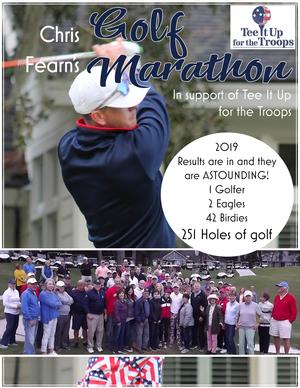