HOUSTON, TX (June 4, 2019) – Where to Retire reveals “The Short List: 50 Best Master-Planned Communities in the United States,” in the July/August issue, on newsstands June 11. The list is the only one of its kind, focusing on communities rather than locales and featuring first-person testimonials by current residents.

Grand Palm, in Venice, is one of nine master-planned communities in Florida to be recognized this year. Recreational paths wind past palm trees and green spaces at this lush, all-ages community. A lifestyle director organizes activities like yoga and dance classes, while canoeing, kayaking and other aquatic fun awaits on Adventure Lake. “We fell in love with it as soon as we saw it,” one resident said.

Nearly a year ago, editors began gathering and evaluating information on hundreds of communities, but chose only established neighborhoods with enough acreage to build at least a year’s supply of homes. The communities come from 17 states. Florida has nine of the winning 50 communities, followed by North Carolina with eight, Arizona with seven and South Carolina with five. Home prices begin in the $120,000s and go upward of $3 million; 35 communities on the list have homes that start at less than $300,000. Almost half of the neighborhoods are age-restricted or age-targeted while the rest are all-ages. The communities are not ranked; rather, they are listed alphabetically by state and then by development name. A two-page chart gives a snapshot of all 50 choices and a guide to their amenities.

As the authority on retirement relocation since 1992, Where to Retire has covered hundreds of the best retirement regions, towns and master-planned communities. The magazine is published six times a year and has a national circulation of 200,000. 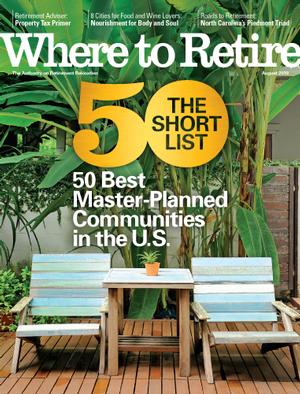