RECORD SET at the WSCGA Amateur Championship at Dataw Island

Beaufort, SC (June 13, 2019) - While Mickelsen may be vying for the grand slam this weekend, all eyes locally were on Dawn Woodard, who set a record today at the Dataw Island Club by winning the Women’s South Carolina Amateur Championship title for the eighth time. The previous record was set by Caroline Cudone and has stood since 1976.

The competition this week was fierce, with Woodard and Hilton Head Prep’s rising-senior Sophia Burnett edging out two-day leader Jodee Tindal of Rock Hill Country Club for a tie at +1. The two duked it out in a nail-biter playoff that went a full five holes before Woodard sunk a birdie putt for the win on the 18th of Tom Fazio’s Cotton Dike course.

Woodard, of Thornblade Club in Greer, SC, has a background in sports psychology and has extensively studied self-awareness and how it affects a player’s game of golf. It seems Woodard herself has embraced a balance in competition and life. When asked what’s next, she said “I’m going to go home, and be a mom. I’ll go back to doing what I was doing before and every other day. Don’t get me wrong, I love to win, but I REALLY hate to lose! But at the end of the day, it’s just golf.”

Burnett, of Colleton River Club, has committed to Furman and also to coming back for many years of competition. Her sister, Camila, is a sophomore at Hilton Head Prep and took home the Mytrice Riccoboni Trophy for the best net score and also looks forward to coming back.

“It was a lot of fun,” Sophia Burnett told WSCGA Director Clarissa Childs. “Thanks so much for having us. We definitely look forward to being part of the WSCGA for a long time!”

The Women’s South Carolina Golf Association (WSCGA) exists to promote and serve the best interests of women’s golf in South Carolina. Founded in 1949, the non-profit WSCGA membership is made up of more than 275 South Carolina Golf Clubs with more than 14,000 women golfers receiving GHIN handicaps. Recognized throughout the United States as one of the premiere Women’s Golf Associations in the country, WSCGA upholds traditions, policies, and high values in regard to the great game of golf.

Congratulations to all the competitors for a fantastic tournament!

Dataw Island is a gated golf, tennis and boating lifestyle community located fifteen minutes outside of historic downtown Beaufort. The island features two recently-renovated golf courses by designers Tom Fazio and Arthur Hills, a tennis center, a community center with workout and massage facilities, three restaurants, a marina, world class croquet lawns, bocce, kayaking, and more. The community has also been ranked the number one best retirement destination in South Carolina by Best Retirement Destinations and is the recipient of the 2017 Bliss Award for “Happiest South Carolina Community” as well as the “2018 Club of the Year” (South Carolina Golf Association) and one of four private clubs named by USTA as an “Outstanding Tennis Facility.” 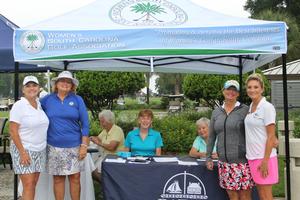