Dataw Island, S.C. (May 13, 2019) – Dataw Island members this year hosted “Master the Cure” Tournaments for their week-long series of cancer fundraising efforts, which together raised an impressive $12,127.

The Battle for Life cancer fundraiser is a volunteer-driven event that has become an institution on the Island. Spearheaded by the Dataw Island Women’s Golf Association (DIWGA), the event began in 2002, and now in its 17th year includes around 300 Dataw members each year who are dedicated to supporting the Beaufort Memorial Hospital Foundation and the Keyserling Cancer Center. A fitting beneficiary for the fundraisers, Keyserling is an innovative cancer treatment facility located right here in Beaufort, SC.

The Center reports that without donations like the ones from Dataw, the entire Cancer Center would not have been possible.

Dataw’s fundraising events comprised a golf tournament with a huge raffle, a memory wall featuring sponsored listings in honor of and in memory of loved ones, a tennis round-robin tournament, croquet, and a “Margaritaville” style pickleball tournament.

Dataw member Susan Emons, this year’s chair of the Master the Cure events, says that she owes the success to Dataw members.

“This was my first fundraiser and this event was only successful because of the generosity and spirit of Dataw Members,” Emons said. “Over 156 sports enthusiasts participated and had a blast doing it.”

A portion of these funds will be going to creating a manual for cancer patients to guide them through a tough journey.

Deborah Schuchmann, Associate Vice President and Chief Development Officer said, “This manual will give patients guidelines of what to expect, who to contact, things to prepare for; an all-encompassing resource for cancer patients. We thank you so much.”

Donations to Beaufort Memorial can also be made online by visiting them at www.bmhsc.org/bmh-foundation/give-online.

Dataw Island is a gated golf, tennis and boating lifestyle community located fifteen minutes outside of historic downtown Beaufort. The island features two recently-renovated golf courses by designers Tom Fazio and Arthur Hills, a tennis center, a community center with workout and massage facilities, three restaurants, world class croquet lawns, bocce, kayaking, and more. The community has also been ranked the number one best retirement destination in South Carolina by Best Retirement Destinations and is the recipient of the 2017 Bliss Award for “Happiest South Carolina Community” as well as the “2018 Club of the Year” (South Carolina Golf Association) and one of four private clubs named by USTA as an “Outstanding Tennis Facility.” 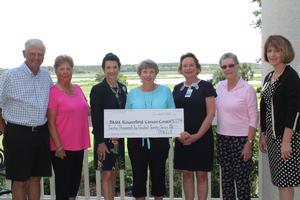