LAKEWOOD RANCH, Fla. (January 11, 2019) – With 31 communities spanning from Apollo Beach to Naples, Neal Communities noted 1,061 sales and 1,148 home closings in 2018 and heads into 2019 with a positive outlook for the regional real estate market. The southwest Florida’s premier, private homebuilder is gearing up for six grand openings this year and two more in early 2020.

Sales started off briskly in early 2018, which exceeded expectations, but slowed during the last quarter of the year, eroding gains that had the builder initially ahead of its business plan for the year.

“Our core business has remained steady and consistent in 2018 as Florida remains one of the bright spots across the country when it comes to housing,” said Michael Storey, president of the Lakewood Ranch-based homebuilding company. “When you look at the fundamental indicators that drive housing across the nation, they all remain strong in the Sunshine State. Unemployment is at an all-time low, wage growth is positive and despite slight increases in interest rates, we are still at historically low levels on 30-year fixed mortgages. Additionally, we know from looking at indices like the long-term appreciation index that housing prices are on par, priced right and remain a good value.”

Communities in Lakewood Ranch and south Sarasota County dominated in its 2018 sales. Three notable neighborhoods were Indigo in Lakewood Ranch, Grand Palm, Neal Communities’ popular master-planned community in Venice, and nearby Milano. According to Metro Study, several of the builder’s communities consistently ranked as top 20 communities throughout the year, including Silverleaf in Parrish and Boca Royale Golf & Country Club in Englewood. In 2018, the builder also introduced Canoe Creek, a Parrish community with American coastal and modern farmhouse-style designs.

Forty six percent of the builder’s home sales in 2018 were inventory homes or move-in-ready homes for quick or immediate occupancy. With its own land buying and development arm, the builder continues to acquire and create new communities of distinction and position itself for steady growth over the next 5-10 years to secure its future in the Florida marketplace.

Last year, close to 60 percent of the company’s sales resulted from buyers who already lived in Florida, and 40 percent stemmed from out-of-state consumers.

“More than 1,000 people are moving to Florida every day,” said Pat Neal, CEO and chairman of the board at Neal Communities. “Now more than ever, people are moving south, away from states that have had difficult economies, higher taxes and harsh winters in exchange for a better quality of life.”

In its south region, encompassing Lee and Collier Counties, the builder opened three new communities, including Windsong, a gated enclave of well-appointed homes, and Verandah, an all-inclusive community located on the banks of the Orange River, in Fort Myers and Marquesa Isles, a private, villa-style community in Naples.

“The south region reached several significant sales milestones in 2018, and as we look to 2019, our team anticipates closing out several communities and unveiling other new opportunities to the southwest Florida real estate market,” said Michael Greenberg, the southwest Florida regional president for Neal Communities. “It is with passion and hard work that our team, now in its sixth year in this region, brings this strong family of brands and steadfast values of one of the most prolific private homebuilders in the state to homebuyers in Naples and Fort Myers.”

One of builder’s key initiatives in 2018 was to strengthen its capital structure by securing long-term financing through bonds at more favorable rates.  The largest regional builder in southwest Florida, Neal Communities paid off all of its bank and private debt during 2018.

“We are extremely proud of our commitment to financial stability, which resulted in our ability to apply for and receive a public bond rating and convert debt to bonds privately placed with insurance companies,” said Neal. “This lack of short-term debt will ensure our continued success in the market and should give buyers peace of mind that they are choosing a builder that will always meet its obligations and retain its strength within the marketplace.”

This year, the emphasis for Neal Communities will be continued brand expansion and entry into Sarasota and Collier Counties with the creation of more cost-effective new homes for working families.

“We are being strategic about our locations and products to offer valuable options for working families and the continued improvement of processes at Neal to assure successful competition with the public builders which dominate the Hillsborough – Collier market in southwest Florida,” said Neal. “Above all, the emphasis will be on training, engagement and professional development of the 226-member Neal team to assure continued success and growth in the more uncertain real estate market.”

Early this year, Neal Communities will unveil three new neighborhoods named Poinciana in Manatee County and Cielo and Vicenza in Sarasota County. Two more will open in the first quarter of 2020. Neal Signature Homes will open a new model home in Country Club East at Lakewood Ranch this spring, and Aria in Venice is anticipated to open summer 2019.

“We have situated ourselves well to offer plentiful opportunities for homebuyers this year and moving forward into 2019 we expect the market to remain relatively consistent,” said Storey. “Our team will focus on what we are doing well, aim to exceed that and become more efficient at our core competencies. This is the type of market where our brand really thrives, and when the backdrop is steady, we have an advantage because our brand sets us apart. Neal Communities has an opportunity to excel above our competition. Other companies just sell houses.”

With over 40 years of building award-winning homes, Neal Communities has over 90 successful communities throughout southwest Florida. The Lakewood Ranch-based builder was named the Professional Builder 2015 “Builder of the Year” and was named one of 2012's "America's Best Builders" by BUILDER Magazine and voted the “2013 Best Residential Builder in Southwest Florida” in a readers’ poll sponsored by Gulfshore Business Magazine. The company is ranked No. 1 locally by Metrostudy and by Hanley Wood Market Intelligence based on number of home sales and ranked nationally among the top 50 builders by BUILDER Magazine. 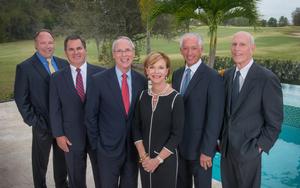