Hardy is a Boykin Spaniel born on October 11, 2018. He is descended from a long line of hunting dogs, as he has all four Boykin Spaniels in history to have earned the highest Retriever title of Grand Hunting Retriever in his pedigree.

Hardy will serve as the personal assistant to his human mother, April Evans, Sporting Grounds Concierge, in The Outfitters shop. His responsibilities will include greeting guests upon arrival with a wagging tail and chasing his tennis ball in between naps.

When not livening spirits at Sandy Creek, Hardy enjoys cuddling with his stuffed puppy and wrestling with his rope toy. Hardy possesses a voracious appetite and often lands in his water bowl in an attempt to chase every morsel. In a few short months, Hardy is looking forward to mastering the art of flushing and retrieving smaller game birds, such as quail.

Hardy’s home at The Sandy Creek Sporting Grounds is Reynolds’ newest amenity and offers a wide variety of sporting endeavors including a 20-station clay-shooting course and archery. 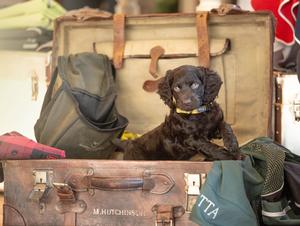