Beaufort, SC (November 27, 2018) - Dataw Island is honored to be named the South Carolina Golf Association’s 2018 Club of the Year!

Since 2013, the South Carolina Golf Association (SCGA) has bestowed this coveted award annually in recognition of clubs that are committed to growing the game through amateur golf by hosting Championships, Seminars, charity events & anything else that supports the growth of the game.

“We are very excited to announce that the Dataw Island Club has been named the SCGA’s 2018 Club of the Year,” said SCGA Executive Director Biff Lathrop. “Dataw has a long history of the supporting the SCGA and our many Championships but to host two Championships in the same year certainly deserves the honor of Club of the Year! Congratulations to all that are a part of that great facility!”

Dataw island and their Director of Golf, Dave Britton, have long supported growing the game, supporting events at the Amateur level as well as the collegiate level and high school levels.

“The SCGA is an outstanding organization,” said Britton. “There is a tremendous pool of talent in the Carolinas, and the SCGA does a great job of nurturing the game of golf and providing opportunities for golfers to advance their skill and sometimes their careers.

“We truly enjoy working with the staff of the SCGA, they are a great group. We love having golfers of this caliber playing our courses and enjoying the entire Dataw experience.”

Lathrop couldn’t agree more. “I want to than the Dataw Island Club for their historic effort this summer hosting both the State Amateur and the Junior championships. It was the first time in the history of our association that one club has hosted both championships in the same year and they nailed it.”

Dataw Island is a private community in Beaufort, South Carolina, featuring two 18-hole golf courses by architects Tom Fazio and Arthur Hills. The community also boasts a tennis facility that was recently recognized as one of the top four in the country by the U.S. Tennis Association, croquet lawns, bocce courts, an indoor and outdoor pools, a fitness center, yoga studio, art studio, community docks, and an unrivaled range of social activities. 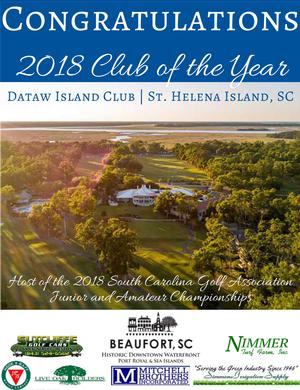