The Dataw Historic Foundation (DHF) was formed by Dataw Island residents who wanted to be sure that the ruins, historic cemeteries, and history of the 867-acre community would not be forgotten. The Sams Plantation historic site is central on Dataw Island, having served as the original plantation house and main living area in the times of indigo and sea island cotton. More recently, the 501(3)c non-profit group built a History & Learning Center adjacent to the site of the chapel ruins that now houses interpretive panels and artifacts from not only the plantation era but dating as far back as 10,000 years ago, when Native Americans occupied the land.

The Dataw Historic Foundation grew from humble beginnings of a small group of concerned citizens to several hundred members strong. Forming the non-profit Dataw Historic Foundation in 1998 has allowed the group to further their fundraising and preservation efforts as well as to recover and retain artifacts that may have been distributed otherwise. With nearly half of the island’s residents on the roll call, the successful funding of more than $200,000 for preservation/restoration projects has primarily been possible due to the enthusiastic and growing support of DHF members. Their collective efforts have received recognition from the Historic Beaufort Foundation, having been granted three prestigious awards: in 2016, the Danner Lifetime Achievement Award; in 2011, the Preservation Award for preservation/stewardship of Sams Plantation Ruins and listing on National Register of Historic Places; and in 2018, the Preservation Honor Award.

While preservation of the historic structures remains a major goal, the Foundation strives to make the rich 300-plus year Dataw history more meaningful for all residents. A walk through the Sams Plantation area and the cemetery reveals over 30 preservation projects to the original structures along with new signs and an antebellum garden. Signage projects reveal the original layout and look of the plantation house complex, how the house was constructed, and how each of the structures was used between 1786 and 1861. Recent preservation projects include reinstallation of floor beams at the plantation house, stabilization of the cemetery wall, reconstruction of the well and restoration of a historic crypt. New signs identify several historic areas of interest around the complex as well as around the island including the former slave cemetery on Cotton Dike Road.

The opening of the History and Learning Center is a capstone in the educational and preservation effort of the DHF. Built through fundraising efforts of the DHF, the Center houses the island’s historic artifacts and offers interpretation: some of the highlights are a display of the history of Dataw from the Native Indian Era up to the present and a scale model of the plantation house. 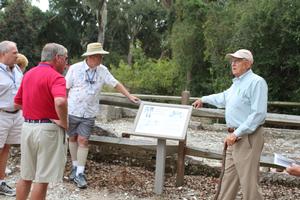