Azallion started the day three shots behind round two leader Trey Crenshaw. Once the final two pairings made the turn to the back-nine, Azallion began his surge to the top. Azallion would birdie thirteen and fourteen to take the lead by two shots heading into fifteen and never looked back.

As Azallion was not in the final pairing and not wanting to celebrate early, he awaited the final totals to let out a sigh of relief and feeling of accomplishment. The Virginia Tech commit spoke about what this Championship wins means to him by saying, "It's a huge deal when you go back and see who has won this event in the past and to know the time I have put in, it's a big accomplishment." Azallion will add his name to the Charlie Rountree, Jr. trophy not only full of history but engulfed with elite players including, Past FedEx Cup Champion Bill Haas, 2009 U.S. Open Champion Lucas Glover and many more. When asked how this win will affect his summer, Azallion expressed, "It's a win that I have worked hard for. Coming from behind, two to three shots back I feel comfortable. I know I can make a run at a title and now confirming that with the trophy makes me believe it even more."

This win opens many doors for Azallion, one of which is an invitation into the Sage Valley Junior Invitational. Other notable perks include: a spot on the Georgia - South Carolina Team Matches, qualifying status for the Bobby Chapman Junior Invitational, and exemptions into The Blade Junior Classic, Beth Daniel Junior Azalea and The Players Championship. Receiving some exemptions for his finish will also be Connor Fahey of Greenville. Fahey started the day just one shot behind the lead and would finish the day two shots behind the lead - but kept his solo runner-up position. Fahey carded two bogies on the front side but was able to stay consistent on the back nine to solidify his position. Second round leader Trey Crenshaw struggled on the back nine, carding two bogies and a double on the 18th that would ultimately drop him to a third-place finish.

In the Boys 13-14 Division, Walker Jennings headed into the final round of the 60th SCGA Junior Championship Presented by the Heritage Classic Foundation tied for the lead and three shots clear of the field. With a game plan to stay consistent and shoot even-par Jennings can now say he stuck to that plan, very well. Jennings would compile two even-par nines to claim his victory by six shots.


Left to right: Jerry Bruns, Walker Jennings, and Zach Adams.
Local favorite Jerry Bruns, 13, finished in second ahead of Zach Adams after finishing the day in a tie that was decided using the USGA format (based on his 18 hole total of 73 in the final round) to edge out Adams.

Bruns is the son of Dataw Island Tennis Concierge, Sara Bruns, and Mike Bruns. He is also the grandson of Dataw Golf Starter Jerry Heinz, a former teaching pro at South Bend (IN) Country Club many years ago. Jerry Bruns' sister, Lucy, also works at Dataw as a Pool Attendant. (Needless to say, he had a lot of support from the Dataw community!)

Jerry first started golfing at the age of seven when he saw his father playing, and thought it looked like fun. Without an available golf team at his middle school, Jerry played on the Beaufort High School Golf Team this past year as a seventh grader, but it doesn't seem his age has been a deterrent to success.

"I am so proud of how hard he works," said Sara, "but for Jerry it's not even 'work.' He has so much fun. He just loves it and would play every day if I didn't ask him to take a break."

Jerry aspires to be a professional golfer on the PGA Tour.  Keep up the great work, Jerry, and we will surely see you on Tour!

Dataw Island is a gated golf, tennis and boating lifestyle community located fifteen minutes outside of historic downtown Beaufort. The island features two recently-renovated golf courses by designers Tom Fazio and Arthur Hills, a tennis center, a community center with workout and massage facilities, three restaurants and impeccably-maintained croquet lawns. The community has also been ranked the number one best retirement destination in South Carolina by Best Retirement Destinations and is the recipient of the 2017 Bliss Award for “Happiest South Carolina Community.” 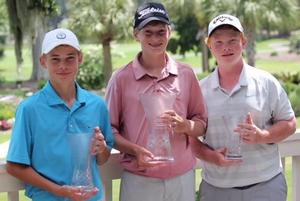