VIERA, FL (June 19, 2018) –  Retired U.S. soldiers at Indian River Colony Club dusted off their dress uniforms on Wednesday, June 14th in celebration of the 243rd anniversary of the U.S. Army.  Approximately 220 people from the 55+ neighborhood on Murrell Road and Viera Boulevard were present at the annual Army Ball, an eagerly awaited formal gala. After the pledge of allegiance, the Indian River Colony Club Chorus performed a medley of patriotic songs and toasts were offered to the United States of America, to the Commander in Chief, to the U.S. Army, to Troops in Harm’s Way, to the Ladies and to Fallen Comrades. Dinner remarks were made by IRCC resident and guest speaker, Brigadier General Jack Hammond (Ret), who recounted his experiences in Iraq and Afghanistan. Dessert was a large "birthday cake" for the Army, with the first cut made by a ceremonial saber. In a time honored tradition, the oldest soldier in attendance presented the youngest soldier with a piece of cake, signifying the passage of wisdom. Steve Kirsner & Company provided musical entertainment, as dozens of former military personnel in dress uniforms and decorations took to the dance floor with their partners.

President of the Army Wives club, Cheryl Morris believes some traditions are well worth preserving.

"Our Army veterans look forward to this event all year long," said Mrs. Morris. "It is always wonderful to see the dress uniforms and military decorations worn so proudly.  I think we all stand two inches taller on the night of the Army Ball."

About Indian River Colony Club –  Viera's very first neighborhood, Indian River Colony Club was originally conceived as a retirement destination for military retirees. IRCC began to take shape in 1986, its vision to create a private country club-like environment for members.  Membership has now expanded to include non-military personnel who want the energetic, patriotic lifestyle cultivated by three decades of members. Still predominantly a haven for military veterans, IRCC maintains a culture centered on service to others. IRCC is a gated golf course community of nearly 800 homes on 453 acres in Viera, owned entirely by its membership. “The Place Patriots Call Home” enjoys 24-hour gated security, a generous maintenance package and a full complement of newly renovated and 100% debt-free country club amenities for active adults aged 55 and over, including an 18-hole, par-72 private golf course.  The patriotic neighborhood was named one of the 2018 Top 20 Golf Communities in North America by Golf Course Home Network. 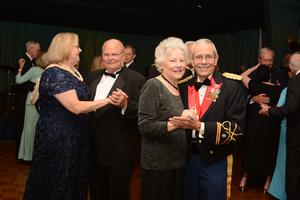