Dataw Island, S.C. (May 9, 2018) – Dunk tanks, carnival games, cotton candy, snow cones … the carnival has come to town! Dataw Island members this year hosted a Carnival for the Cure as the finale to annual their week-long series of cancer fundraising efforts, which together raised an impressive $12,275.

The Battle for Life cancer fundraiser is a volunteer-driven event that has become an institution on the Island. Spearheaded by the Dataw Island Women’s Golf Association (DIWGA), the event began in 2002, and now in its 16th year includes about 300 Dataw members each year who are dedicated to supporting the Beaufort Memorial Hospital Foundation and the Keyserling Cancer Center. A fitting beneficiary for the fundraisers, Keyserling is an innovative cancer treatment facility located right here in Beaufort, SC.

The Center reports that without donations like the ones from Dataw, the entire Cancer Center would not have been possible.

“Nearly 10% of all contribution received by the BMH Foundation over the past 30 years have come from the Dataw community” reads the 2014-2015 BMH Keyserling Foundation report Giving Well; Recognizing Our Supporters.

Dataw’s fundraising events comprised a golf tournament with a huge raffle, a memory wall featuring sponsored listings in honor of and in memory of loved ones, a tennis round-robin tournament and their almost-famous “Partee,” bocce, and a croquet tournament. Now in its fifth year, the croquet component has added a lot of sporting fun for those who may not necessarily be athletes – the skills tests are quick to learn and the top ten competitors go head to head in an exciting shoot-out. And, of course, the Carnival was an excellent way for all members to show support and share some laughs.

Dataw member Celeste Nalwasky, this year’s chair of the Carnival for the Cure, Luncheon and Memory Wall, says that the support from Dataw members is nothing short of amazing.

“Dataw members are very supportive of Beaufort-area non-profits and civic groups,” Nawalsky said. “You can hardly blink around here without walking past a neighbor on their way to volunteer one place or another.”

She also noted that this particular event is close to home for many members, saying that “Cancer is now so widespread, that I think we all know someone close to us who has been affected. Sometimes we think, ‘I wish I could do something to help!’ This series of events offers that opportunity – and as a bonus, we have a ton of fun doing it!”

Donations to Beaufort Memorial can also be made online by visiting them at www.bmhsc.org/bmh-foundation/give-online. 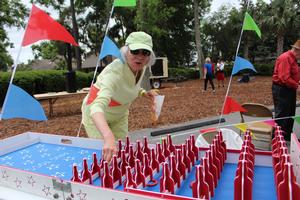