In March, close to 40 percent of the builder’s sales consisted of move-in-ready homes.
“A continued shortage in residential resale home inventory across the country and particularly in the southwest Florida real estate market helps fuel our sales success,” said Michael Storey, president of Neal Communities. “That coupled with degrading weather conditions in the Northern and Midwestern states and the ideal locations of our new home communities will continue to fuel new home sales for Neal Communities.”

“Due to our financial strength, we are able to provide a consistent, steady supply of inventory,” said Storey. “Our buying power allows us to provide excellent value and these two factors allow us to compete successfully with the resale market. Most buyers see the benefit of buying new rather than a resale when these aspects are considered.”

With more than 2,300 square feet of outdoor space, the amenity center’s large lanai will feature wraparound verandas, shade structures, a covered tiki pavilion, palm trees and an island sand pit with hammocks. The Grand Palm Social Club is slated to open in 2019.

Two model homes in Naples won awards in the Collier Building Industry Alliance Parade of Homes last month. The Merit Award went to the Windermere model and the 2018 Overall Excellence in Construction and Design went to the Keswick model. Both model homes are located at the popular community of Avalon of Naples, which is currently halfway sold out, and also at Richmond Park in north Naples. 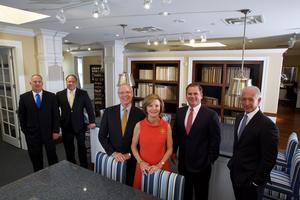