Fourth quarter sales off to strong start for Neal Communities

The first month of the fourth quarter brought its year-to-date sales to 1,003 new home sales, a five percent increase from this time last year.

“Venice is a very popular location for new homebuyers looking to be in close proximity to world-class beaches, a quaint downtown with shopping and dining and convenient access to several bigger city centers,” said Carlos Puente, vice president of sales for the Lakewood Ranch-based builder. “Additionally, with 10 professionally designed and decorated models at Grand Palm, ranging from 1,434 to 3,346 square feet, there is a floor plan for everyone. This south Sarasota County community has been a highly desirable for families, empty nesters and retirees alike.”

Neal’s luxury custom homes division, Neal Signature Homes, with prices starting from the mid $600,000s, sold two in October and is nearing sell out at The Inlets in Bradenton, with only one waterfront home site remaining.

“Across all of our communities, one aspect that continues to fuel our rapid sales pace is the constant supply of inventory homes, ready for immediate move in,” said Puente. “We anticipate this supply to be in even more demand as we near the holiday season, and people want to finalize their moving plans and settle into a new Florida home.” 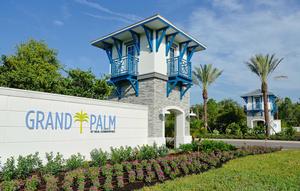