SUNSET, S.C. (November 9, 2017) – The Reserve at Lake Keowee’s men’s 6.5 combo USTA team won the 2017 South Carolina Combo League Championship on Hilton Head Island, South Carolina. The team’s win qualifies them for the Southern Section event in March 2018. That event’s winner will go on to compete at the National Championships.

“The Reserve is immensely proud of its members and their success at the Tennis State Championship this year,” Mike Lissner, The Reserve at Lake Keowee’s Director of Tennis, said. “This win speaks to our evolving tennis program and the amount of work our members are putting in to raise their level of play.”

The men’s team bested a Charleston-based team at the Palmetto Dunes Tennis Center.

In the final, Kurkcu and McGonigle’s second set was tight early on with a three to three score, however, the duo won the last three sets and the match, completing a straight set of wins.

Forbes and Post lost the first set, stayed focused to win their second, also forcing a match tiebreaker. The team jumped to a seven to nothing lead and closed out the match with a victory.

About The Reserve at Lake Keowee
Created in 2000 by Greenwood Communities and Resorts, The Reserve at Lake Keowee is an award-winning residential community that spans 3,900 acres in the foothills of the Blue Ridge Mountains, with 30 miles of shoreline on Lake Keowee and convenient access to nationally recognized commercial and cultural centers that include Greenville, S.C.; Asheville, N.C.; and Clemson and Furman Universities. A 200-slip Marina, Village Center, Jack Nicklaus Signature Golf Course, and more than 1,400 acres of parks, preserves, trails, and green spaces highlight more than $100 million in completed family amenities at The Reserve. The Reserve has approximately 700 members from 30 different states. Homesites at The Reserve are available from $100,000 to $950,000; homes from $500,000 to $3+ million. 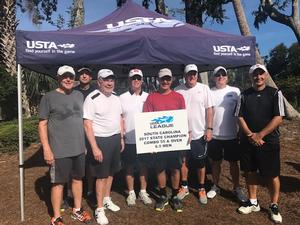