Hilton Head, SC (October 13, 2017) - If you know a loved one who’s battled breast cancer, take a moment to thank a member of Sea Pines Country Club.

Their Play for P.I.N.K. events, which serve as fundraisers for the Breast Cancer Research Foundation, have raised more than $600,000 for breast cancer research in the last 14 years.

“When you put that into perspective,” says Play for P.I.N.K. executive director Stephanie Hamburger, “we’re funding 20 research projects per year, and each research grant is $250,000. So Sea Pines Country Club has been able to fund more than two years of research.”

That’s two years closer to a cure for what Hamburger says is the lynchpin to beating all cancers.

Sea Pines Country Club members are doing their part to break that spoke, with a slew of events scheduled for Oct. 18-28, including a day of bridge, a ladies’ golf day with a luncheon, a men’s golf event, two days of tennis including a round robin tournament and Pro-Am play, and a dinner with live and silent auctions at which Hamburger will speak.

Though the dinner is limited to club members, Sea Pines Country Club members attending the tennis, golf and bridge events are welcome to bring a guest.

Hurricane Matthew derailed their planned events last year, but in 2015 the club raised $81,000 at Play for P.I.N.K. events. Event chair Judi Levy hopes to break that record this year, and says the club’s strong support of outreach efforts like Play for P.I.N.K. makes that goal a real possibility.

“People want to be part of a club that does philanthropic things like this,” Levy says. “That’s one of the reasons I wanted to be a club member. You join a club and you do it for the social activities, but these people are very committed to giving, and getting involved in the community.”

For Levy, the club’s Play for P.I.N.K. efforts are more personal than merely wanting to give back. Levy lost her first friend to breast cancer in 1994. Two years later, she lost two more. Last year, her older sister was diagnosed with the disease.

For years, Levy has been involved in breast cancer walks and fundraisers and now, as an active member in Sea Pines, she’s heading up the Play for P.I.N.K. events. She says knowing that every dollar they raise will go toward research helps her to regain some feeling of power over a disease that often leaves families feeling helpless.

“I haven’t lost anyone since 1997, it’s great,” she says. “I know there’s a difference being made and I know that research being done is making that difference.”

ABOUT SEA PINES
Homeowners at this 5,000-acre oceanfront enclave on South Carolina's Hilton Head Island have access to four championship golf courses and five miles of pristine Atlantic beaches, along with a full-service marina, tennis and equestrian facilities, resort dining and a 603-acre Lowcountry nature preserve. Lots priced from $119,000 to $5 million, with condos, townhomes, villas and single-family homes priced from $170,000 to $8.7 million. 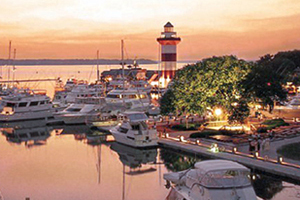