Dataw Island, SC (August 25, 2017) - Last years’ pants look like waders. The kids’ backpack straps have come unbound. They each need notebooks and folders for each class, plus binders, markers, scissors, paste... it can feel like the shopping list is growing faster than the kids!

As any parent can attest, “back to school” time can be a costly venture. Although it can be a great boon for retailers, some families are not able to meet the demands of the back to school spending bump and the kids risk starting out the year two steps behind with insufficient supplies and ill-fitting uniforms.

Enter Dataw members. Whether gathering supplies for the children of migrant farm workers, supporting local school supply drives through United Way, adopting a school or volunteering with literacy programs, each year Dataw Island members contribute to the education of local children by donating supplies, money, and a great deal of time and talent.

One major initiative to which they contribute is Operation Backpack. A subsidiary of United Way of the Lowcountry, Women United started Operation Backpack four years ago to provide children in our community the tools they need to be successful in school. Dataw Island members play a large role in Operation Backpack, under the guidance of fellow member Alison Barton. Barton coordinates a Dataw drive, collects the supplies, and serves as the liaison to United Way.

Jaime Dailey-Vergara, the Director of Marketing & Communications for United Way of the Lowcountry, says “We want to break any barrier that would prevent a student from succeeding in school, so when we learned that many students were starting the school year without the school supplies they needed, Operation Backpack was born.”

Local school guidance counselors help identify children in need who are not being served by another agency. Women United collects supplies and fills the backpacks with everything from pencils and paper to folders, crayons and glue sticks for these kids. Each of the children in the program are also given two school uniform shirts, which are specific to their size and school. Participating schools are also given paper products, hand sanitizer, and other supplies for the classroom.

“The support we receive from Dataw Island for this effort is incredible,” Dailey-Vergara said.  “Dataw Island residents generously donated school supplies and financial support again this year to help make Operation Backpack successful. In addition, many Dataw residents volunteered their time helping to pack the backpacks and deliver them to the schools.”

As the saying goes, “it takes a village…” and this year was no exception. Two young ladies learned the gratification and joy of volunteering when Barton sought out volunteers to sort and organize the donations being collected, as she was not going to be in town during this phase of the project. In her absence, another Datawite, Kitty Trice, stepped up to the plate and volunteered herself and her granddaughters to take on the task, thinking it would be a nice activity for them one afternoon.

The first day that they went by Barton’s house to organize the collected supplies, Trice, along with Maddie, 11, and Lindsay, 7, were shocked to see the size of the pile of supplies that had already gathered. All three of them had fun working through the organization, Kitty says. The next day, they returned to see if any stragglers had showed up, and found another huge pile. And again, the next day!

“The girls and I were delighted,” Trice says. “They just loved being able to contribute to something meaningful and we all enjoyed the time together.”

Dailey-Vergara adds, “We are so grateful for the generosity and caring spirit of the Dataw Island community. Dataw Island residents know what it means to live United!”

Begun just four years ago, Operation Backpack has continued to grow each year as more people learn about it and provide support. This fall, 600 backpacks full of supplies were delivered to students at eight schools throughout Beaufort and Jasper counties. Those interested in learning more about United Way of the Lowcountry and Women United, please visit www.uwlowcountry.org or call (843) 982.3040. 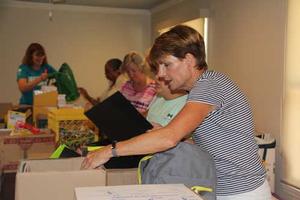