“We continue to experience the disappearance of a true season here in southwest Florida with summer months being almost as busy as the rest of the year,” said Michael Storey, president of Neal Communities. “With many communities reaching sell out and others entering new phases, there is always something new to see at Neal Communities. Our diverse range of choices for homebuyers coupled with the experience of working with a family-owned business is what truly sets us apart.”

In July, Neal Communities unveiled eight new models, a new Discovery Center and a new entrance at Grand Palm. Visitors can browse through 10 professionally designed and decorated models ranging from 1,434 to 3,346 square feet. Potential homebuyers can choose from architectural styles such as, Mediterranean, island, Spanish, Tuscan, British West Indies and French country. The single-family designs include the Captiva, the Kiawah, the Laurel, the Meadow Brook, the Sea Mist and the Sea Star. The villa models offered are the Crystal Sand, Tidewater, Sandcastle and the Tidewinds.

Truly a modern community, Waterset is a filled with amenities to enhance any lifestyle, including a resort club with pool, playgrounds, fitness center, parks and walking trails and a community café, among others.

The builder’s Windwood community in Venice has sold out. Other communities close to selling out are Central Park in Lakewood Ranch with one fully furnished model, Woodbrook in Sarasota with one move-in-ready home and The Inlets in Bradenton with only two waterfront home sites remaining and a model home.

Neal Communities’ south region, which encompasses Lee and Collier Counties, has only two home sites left in the popular Canopy community and four remaining opportunities in the custom-designed Reflection Lakes – both in Naples. Estero Place, a private, gated community in Estero, has three sites remaining.

Construction is almost complete on Richmond Park, the newest Naples community by Neal Communities. The builder is on track to open the community for sales this summer. The 15-acre neighborhood will feature multifamily, luxury carriage homes with 96 homes available for potential homebuyers. Surrounded by Florida’s natural beauty, the neighborhood has two lakes, and its amenities will include a clubhouse, resort-style pool, spa and a sundeck for lounging.

Situated in a rapidly growing area in Naples, Richmond Park has already attracted a lot of interest. A VIP list for the community has been set up at RichmondParkNaples.com to provide exclusive updates. 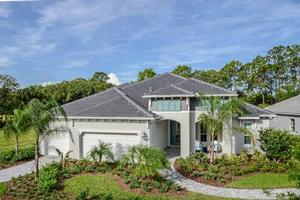