The builder will reveal six new single-family models and two new villa models at events staggered throughout the week, culminating with a grand opening from 11 a.m. – 1 p.m. on Saturday July 29. Open to the public, the grand opening will feature food, music, games and tours of the community.

Visitors will be able to browse through professionally designed and decorated models ranging from 1,632 to 2,731 square feet. Potential homebuyers can choose from architectural styles such as neo-classical, Mediterranean, island, British West Indies and French country. The single-family designs include the Captiva, the Kiawah, the Laurel, the Meadow Brook, the Sea Mist and the Sea Star. The villa models offered are the Sandcastle and the Tidewinds.

On July 26, the builder dedicated and opened Aucilla Road, which was created specifically to serve as a new entrance for the community. Located off River Road in Venice, the new entry and road gives residents on the east side access and further helps to reduce traffic at the other two existing entrances. The new road, which stretches for 3,300 feet, intersects at Observation Boulevard and leads all residents and visitors to the Discovery Center at Wacissa Drive.

“Grand Palm is truly a special place,” said Pat Neal, CEO of Neal Communities. “It took seven years of research, planning and community collaboration to bring this beautiful community to life. The Neal difference shines through in our neighborhoods, such as Grand Palm, because our entire team lives, works and raises their families in the communities we create. We are fully vested in creating communities of distinction with integrity that leave a long legacy of stewardship and beauty behind, seamlessly integrated into Florida’s natural landscape for families to enjoy.”

Grand Palm is the largest neighborhood Neal Communities has created in its more than 40 years of building, with plans for 1,999 homes at completion. Month after month, the fast-selling Grand Palm has continued to lead sales for the builder. The community opened in September 2012 and was the first ever to be built under the stringent requirements of Sarasota County’s 2050 plan – a plan intended to guide development while preserving Florida’s natural landscape.

Grand Palm’s layout preserves more than 33 percent of the land as open space and features spectacular preserved trees from the grand entrance, continuing throughout the community. Residents have miles of walking and bike trails that weave through the community and into a private wooded island surrounded by Adventure Lake. 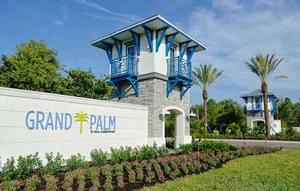