Greensboro, GA (May 30, 2017) – The recently-formed Reynolds International Club hosted an event at the newly remodeled Eighty8 Kitchen + Cocktails on May 23rd. Over 20 countries were represented as Reynolds Members who are originally from or have lived in other countries gathered and enjoyed international hors d’oeuvres prepared by Reynolds Chef Derin Moore.

Founding Members Helen Hall from England, Riezl Baker from the Philippines, and Mirjam Van Steklenberg, a native of the Netherlands, were excited about the evening’s turnout. “Riezl, Mirjam, and myself met at The Tavern one afternoon and discussed how much fun it would be to form an international club and meet other Members who have lived in the same countries where we lived,” said Helen.

Their meeting resulted in an idea that generated responses from over 100 Members, who signed up after the three ladies sent out a couple of emails. “It is great to know that we have many Reynolds Members who have lived overseas, and they are just as excited to meet others and share their experiences,” said Riezl Baker.

The club’s mission is to “cultivate friendships through global experiences,” and many “new” friendships began that evening, with over 45 Members in attendance. 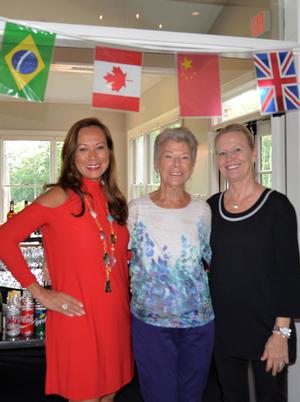