Beaufort, SC (May 1, 2017) - For the past 135 years, National Arbor Day has been celebrated around the world, and most recently, right in our own backyard. Always on the last Friday in April, National Arbor Day was begun by Sterling Morton, who wanted to set aside a day to plant trees.

Today, Dataw Island Garden Club members along with the local Postmaster, Jimmy Cox, and Palms on the Parkway’s Isaiah Daise, gathered at the Ladys Island Post Office to continue the Arbor Day tradition, planting a tree for all to enjoy.

The tree selected was an Eastern Redbud, provided at cost by Palms on the Parkway. A flowering ornamental tree, the Eastern Redbud is known as the harbinger of spring, providing one of the season’s most dramatic displays of pink flowers. The species is not only attractive to humans, but it also attracts butterflies and songbirds.

For the past two years, the Garden Club has celebrated Arbor Day by planting trees on Dataw Island. This year’s move to the Post Office was motivated by last fall’s storm, which took out many trees both on island and off. The Garden Club hopes to help beautify the Post Office by providing this cheerful, welcoming, tree. 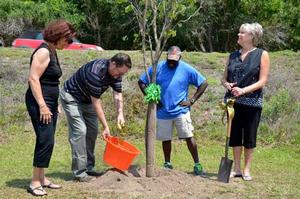