The donation from the homebuilder’s 100 home sales in February was made to the local AHA chapter.

As an official Life is Why We Give partner, Neal Communities chose to support the American Heart Association, the nation’s oldest and largest voluntary organization dedicated to fighting heart disease and stroke, by donating $100 for each home sold in February, which is heart health month across the country. The Life Is Why We Give campaign allows consumers to consider their reasons to live healthier, longer lives and to give in honor of those reasons.

“I am so proud of our team for such a tremendous effort to support this cause,” said Michael Storey, president of Neal Communities. “For too long, heart disease and stroke have stolen many of our precious moments. Last month, we worked together to affirm that we’re more powerful than these diseases – because everyone has a reason to live a longer, healthier life… and that is the reason is why we give. Throughout the year, we will remain committed to healthy communities, healthy living and giving back philanthropically to local organizations.”

According to the Centers for Disease Control and Prevention, about 610,000 people die of heart disease in the U.S. every year with one in every four deaths. Eighty percent of those cardiac and stroke events may be prevented with education and action, says the American Heart Association.

“We are so thankful for the generosity of partners like Neal Communities,” said Chad Loy, vice president of the Central Florida American Heart Association. “This contribution will allow us to further our mission to build healthier lives free of cardiovascular diseases and stroke.”

About the American Heart Association
Founded in 1924, the American Heart Association is the nation’s oldest and largest voluntary health organization dedicated to building healthier lives, free of heart disease and stroke. To help prevent, treat and defeat these diseases — the No. 1 and No. 5 killers of Americans — the nonprofit funds innovative research, conducts lifesaving educational programs and advocates for stronger public health policies. 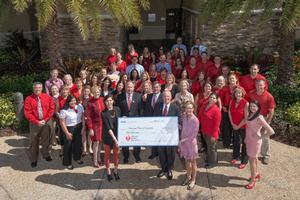