BRADENTON, Fla. (February 21, 2017) – Pat Neal, CEO and chairman of the board at Neal Communities, and his wife, Charlene Neal, recently gifted $1 million to the Boys & Girls Clubs of Manatee County, an afterschool and summer program that offers hope and opportunity to every child in the community, especially those who need it most.

The longtime Lakewood Ranch-based builder and philanthropist made the substantial donation to the nonprofit’s Invest in Kids Campaign. The couple will be recognized with naming honors at a significant part of the new DeSoto Club campus. The Flex Sport Field will be dubbed the Patrick and Charlene Neal Field.

“The Boys & Girls Clubs of Manatee County is extremely grateful to Pat and Charlene Neal for this very generous gift,” said Dawn Stanhope, president and CEO of the organization. “We are particularly pleased that this donation will underwrite the new “flex field” at the Club. Our sports programs have been a vital part of Boys & Girls Clubs’ initiatives and thanks to the Neal family, our members will have a great outdoor space to enjoy for many years to come.”

The Invest in Kids Campaign will rebuild the Clubs’ physically and functionally obsolete campus. The new campus will serve up to 600 kids, more than double the number currently served by the nonprofit, which provides life-changing impact and a safe and fun place for young people to learn, grow and build supportive relationships with caring adults.

“Charlene and I support the Boys & Girls Clubs for the growth and opportunities that the Clubs have given young people in our community during the nearly five decades that we have built here,” said Pat Neal. “We support not only the people but the mission, the importance and the results: young people who grow up and live their lives as capable contributing citizens in our community.”

Pat Neal founded Neal Communities in 1974, and since then, the award-winning homebuilder has created 70 successful communities and built over 11,000 homes throughout southwest Florida. Under his leadership, the company broke all previous sales records, ending the 2016 with 1,109 sales and 1,129 closings totaling over $430 million.

Photo from left to right: Pat Neal, Charlene Neal and Caleb Grimes, chairman of the Invest in Kids Campaign cabinet and a local attorney 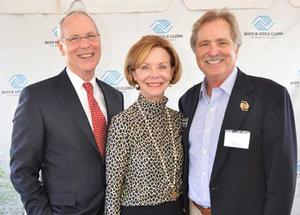