On Sunday, December 4, Santa Claus (supported by hundreds of Dataw Island “elves”) hosted a Lunch with Santa and a Toy Extravaganza in the Carolina Room at Dataw Island. The children and accompanying adults were treated to a delicious kid-friendly complimentary lunch, the kids got to choose from a sea of toys, and then sat with Santa for a family photo to complete the afternoon.

These family photos were missing something though, and that was a deployed parent. VMFA-115 is serving in the western Pacific in a joint operation with MAG 12, and they have been since the fourth of July.

“Five months in to deployment us moms, and the kids, are really exhausted,” said Sarah Brown, herself a mother of two (ages 12 and 15) and wife to the unit’s Commanding Officer.

Fighting back a tear, Brown added “I am just so amazed. Simply amazed and in awe. I can’t believe the generosity of Dataw Members. I mean – every toy is awesome, and there are so many toys, and so many volunteers.”

“This is a long-standing tradition at Dataw Island,” said Ted Bartlett, Dataw Island General Manager. “We are very proud of our members who are taking part in the recent Santa Claus Open. Hosting charity outings such as this is a positive way to help the community and to assist those who are sacrificing for our freedoms.”

Jimmie Brown, the unit’s Family Readiness Officer, is a retired marine and also appreciates first-hand how much it means to the families involved. During his 20 years in the service, there was not a “Family Readiness” program in place.

“Back then, we were told ‘it’s time to go’ and we kissed our wives goodbye. That was that,” said FRO Brown. “Now I am privileged to serve the families in helping to build a great support system, helping them in the transition and supporting them throughout. Our motto at 115 says it all: One Family, One Fight, One Team.”

Dataw member JoAnn Aspray is also thankful for the opportunity to pitch in and help. “I've been volunteering for the Santa Claus Open for five years and every group of kids has been wonderful. It’s just so great to see their happy faces! They are just so sweet and the moms are so appreciative!” Aspray also added with a twinkle in her eye, “The Cummings are also saints for doing this each year.” (Let’s just say that Santa knows Jack Cummings very, very well.)

Sarah Brown also wants Dataw members to know how much this event means to the family of the deployed service people. “They (Dataw members) may not know it, but this event is famous. I had heard all about it last year from the parents whose spouses were deployed at Christmas in 2015, and knowing that our unit would be deployed this year, we just prayed and prayed that Dataw would do this event again for our kids to enjoy, too. It’s so nice to have something to look forward to and the kids just love it. The event really is famous! It’s one of the first things that people share with new members coming into our unit, and we are so thankful that Dataw has continued this tradition.” 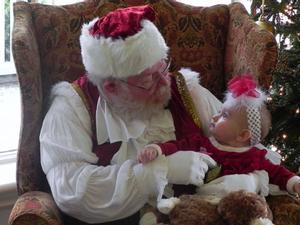